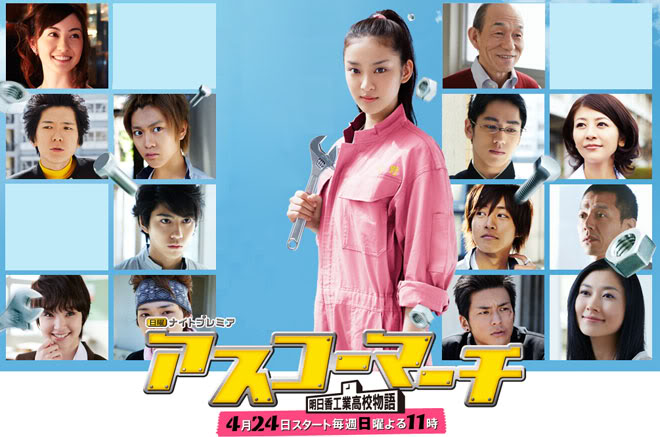 Story
Yoshino Nao fails the entrance exam for her first choice girl’s school and reluctantly enrolls at a technical high school. There are just three girls among the 148 new students who have entered Asuka Technical High School (nicknamed Asuko)!!! Depressed to be the only girl in Class 1A, Nao does not fit in with Tamaki Makoto and her others classmates. She also assumes a condescending attitude towards them. She is surrounded by boys with strong characters such as Wajima Go, Hirose Satomi and Murai Hajime who always start quarreling once they open their mouths and Takeuchi Kazuya who has a cold attitude and stand aloof from the other students. Furthermore, she is suddenly hustled within the school by Yokoyama Yuto, who for some reason works part-time as a host! Nao is not accustomed to the consecutive lab lessons and starts high school life without her bearings everyday. One day, Nao learns about the circumstances at Tamaki’s home and takes some action. This provokes his anger … …!

Characters
Takei Emi as Yoshino Nao
She failed the entrance examinations for the girl’s school which she longed to go to, and reluctantly joined Asuka Technical High School’s Class 1A. She feels that she should not stay here and tends to adopt a snobbish attitude towards her classmates. Furthermore she cannot tolerate being the only girl in class and starts to contemplate a transfer to a normal high school.

Matsuzaka Tori as Yokoyama Yuto
A student of Class 1A. A good-looking guy who used to be a child star. He lies about his age and works as a host at night. He is used to dealing with females, but Yoshino Nao’s suggestive behaviour baffles him. He appears cheerful but has a dark side, and tries not let other people see inside of him.

Kaku Kento as Tamaki Makoto
A student of Class 1A. He enrolls at Asuka Technical High School because he wants to inherit his father’s screw workshop. He works hard at part-time jobs to support the family as he has three younger siblings. He does not like Yoshino Nao, who grudgingly spends each day at school. He is a strict but kind and enthusiastic guy.

Nagayama Kento as Takeuchi Kazuya
A student of Class 1A. He is a bright student and could have enrolled in a top school, but has for some reason joined Asuka Technical High School. The reason is a mystery. He looks down on his classmates as fools, and also cannot stand Yoshino Nao.

Sasano Takashi as Yoshino Fujio
Yoshino Nao’s grandfather. He looks after Nao on behalf of her parents who have been posted overseas for work. He is good at cooking because he used to be a French chef. This is also the reason why dinner at the Yoshino home is very extravagant. He hopes to be of help to Nao, who worries about high school life, but he always ends up giving misguided advice.

Shiraishi Miho as Shirakawa Yoriko
The health teacher at Asuka Technical High School. A person who becomes a friend to female students. She possess the glamour and composure of a woman, and has many fans among the male students. She is candid and does not mince her words, but she worries about Yoshino Nao.

Katsumura Masanobu as Omukai Toru
The form teacher of Class 1A and the teacher in charge of electric science. He has a nonchalant attitude and respects his students’ independence. He is actually an alumni of Asuka Technical High School, and keeps his passionate engineer’s spirit a secret to himself. A newly married man.

This blog contains information and musings on current and upcoming Japanese dramas but is not intended to be comprehensive.
View all posts by jadefrost →
This entry was posted in Spring 2011 Dramas, TV Asahi and tagged Asuko March!, Kaku Kento, Katsumura Masanobu, Matsuzaka Tori, Nagayama Kento, Shiraishi Miho. Bookmark the permalink.