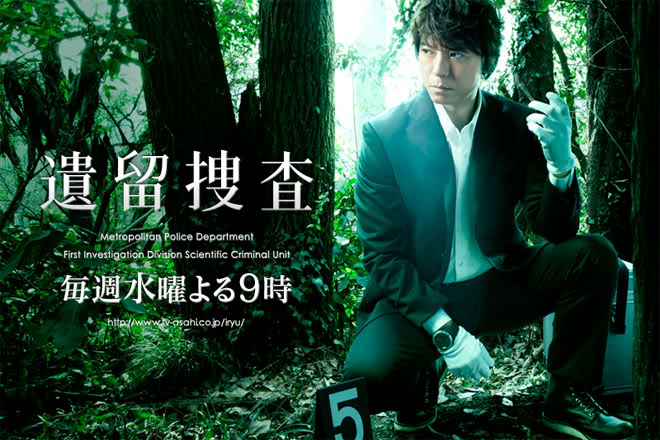 Story
Popular songwriter Zaitsu Yoichi is murdered. Oda Miyuki, who launches an investigation together with Sone Takeo, the head of the Homicide Squad’s Section, lays eyes on a suspicious-looking man carrying a backpack. He is Itomura Satoshi, a chief investigator in the Scientific Criminal Unit (commonly called the “Lost Articles Section”). According to her senior, Miyashita Haruhiko, “nothing good happens when he is involved”. However, he pays no heed to his reputation among the people around him. Itomura is striking the keys of a broken toy piano left at the scene … … A list has been made of Zaitsu’s personal effects such as his digital recorder and music scores, but Itomura wishes to add the toy piano, which Zaitsu had treasured since he was a child, to the inventory of personal effects. That’s because these are the personal belongings that are most familiar to the victim. However, it is not acceptable to Sone. Itomura listens to the songs left in the digital recorder, and gazes at the music scores. Furthermore, he tries to repair the broken toy piano … … What is Zaitsu’s true face that Itomura has found out from those personal effects? And what is the truth and the hidden feelings behind Zaitsu’s murder?

Characters
Kamikawa Takaya as Itomura Satoshi
A chief investigator in the Forensics Science Section of the Tokyo Metropolitan Police’s Criminal Affairs Department. Rank: Assistant Inspector. After graduating from university, he joined the Tokyo Metropolitan Police and was later assigned to the crime lab. He was an excellent investigator but was transferred to the Forensics Science Section of the First Investigative Division two years ago at the recommendation of the division head. He possesses sharp, discerning eyes and an obsessiveness, and will thoroughly track down cases based on the personal effects left behind at the scene. The moment he “switches on”, he will be so engrossed in a case until he forgets about eating and sleeping. As a result, the forensics and crime scene investigators whom he directs, are always at the mercy of his hangups. Once he encounters an object which interests him, he cannot let it go if he does not figure it out and will even pay out of his own pocket. However, he is constantly short of money. He rides a bicycle perhaps to save travelling expenses and often to crime scenes too. Maybe its because he devotes himself to broad and narrow interests that he is surprisingly skillful. He plays the piano and is good at cooking.

Kanjiya Shihori as Oda Miyuki
A sergeant with Section One of the homicide squad at the Tokyo Metropolitan Police’s Criminal Affairs Department. At first glance, she does not appear suited to be a detective, but she is, in fact, cut out for the job. Maybe it is because she belonged to the kendo club’s varsity team, is polite for her age and has an old fashioned attitude that she is even popular with old men. She prides herself on her superior rate of information gathering in investigations of crime scenes and the immediate vicinity as well as personal effects, because she reads the situation and is able to consider the feelings of others. She was selected for the First Investigative Division on the strength of that talent. However, she is still poor at investigations and also makes mistakes due to her lack of experience. She is always told by her superior, Sone Takeo, “You were chosen simply because you’re a female and there aren’t enough fellows to be detectives,” but he also appreciates her honesty in investigations. It is a culture shock for Miyuki when she encounters Itomura Satoshi who sticks to his convictions even if they break the organisation’s rules and she begins to reconsider what she should be as a detective.

Sano Shiro as Sone Takeo
Head of Section One of the homicide squad at the Tokyo Metropolitan Police’s Criminal Affairs Department. Rank: Inspector. He has the authority to demand investigation formalities and arrest warrants as the section head. As a police officer, he has a strict sense of justice, the temperament of an excellent but stubborn worker and the soul of an old fashioned detective. He is intensely hostile towards Itomura Satoshi whose personality is the exact opposite of his, and at times, they have heated clashes. Although he declares, “I dislike you”, on the inside, he has to admit Itomura’s ability and that makes him feel a little irritated with himself.

Osugi Ren as Kagami Toru
Head of the First Investigative Division at Tokyo Metropolitan Police’s Criminal Affairs Department. The former head of the crime lab, he headhunted Itomura Satoshi for the Forensics Science Section to be the man to unite the crime scene and forensics. He makes hardhearted decisions precisely because his starting point is to make the police organisation good, and he is feared by his subordinates.

This blog contains information and musings on current and upcoming Japanese dramas but is not intended to be comprehensive.
View all posts by jadefrost →
This entry was posted in Spring 2011 Dramas, TV Asahi and tagged Iryu Sousa Series, Kamikawa Takaya, Kanjiya Shihori, Osugi Ren, Sano Shiro. Bookmark the permalink.