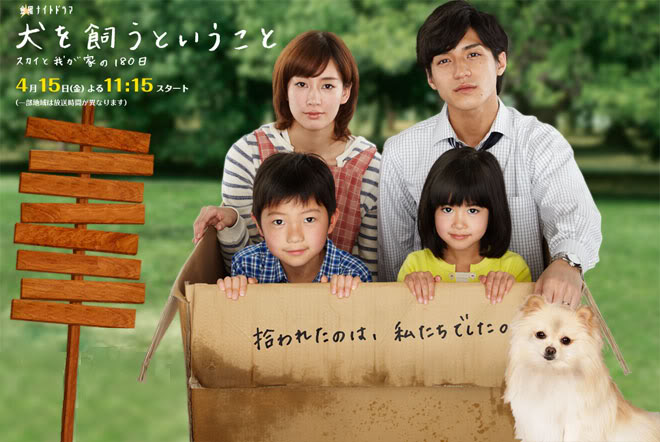 Story
The Hongo family live at an old residential complex located at the foot of the nearly completed Tokyo Sky Tree. Yuji, the father, Sachiko, the mother, and their children 8-year-old Dai and 6-year-old Mako appear to be a moderately happy and extremely ordinary family. However, each one of them actually has something which they hide in their hearts and dare not give voice to. Yuji works at the human resources department of a medium-sized machinery manufacturer. The reason for his stomach pain is the stress from his role in laying off employees older than him. Amid the days of getting down on his knees, Yuji is soon forced to inform the boss who has looked after him, that he is being laid off, but on this occasion, he is told a completely unexpected truth. The family has had a can called the “Box of Dreams” even before the children were born. It is a piggy bank for a trip to Hawaii. However, the money has never been saved up … … The Hongos are quite a poor family. Yuji’s paltry salary cannot feed this family of four. Sachiko holds several part time jobs while she economises everyday. “Our family will break down some day,” she is told by their somewhat cold son, Dai. One day, Mako sees a Pomeranian puppy shivering and sitting alone in front of a supermarket. The puppy is also sitting at the same place the next day, as if it were waiting for someone. A vehicle from an animal care centre which had been notified about the dog, arrives and Mako soon sees it loaded on. She desperately chases after the vehicle. “I have to save it!” What awaits Mako when arrives at the centre in pursuit of the puppy?!

Characters
Nishikido Ryo as Hongo Yuji
The head of the Hongo family. He abandoned music which had been the dream he pursued as a student and now works at a medium-sized machinery manufacturer. To put it nicely, he is earnest, but is in fact a coward who cannot take risks. Every word that comes out from his mouth is idealism. Because of the wave of depression, his job is to tell employees older than him that they have been dismissed as part of the company’s reorganisation. It is a difficult role. However, he accepts it as his job. Then, some change comes upon him. And because of that, this time the roles are reversed and he is the one being told that he has been retrenched … …

Mizukawa Asami as Hongo Sachiko
She married Hongo Yuji because she was pregnant. As a result of this, she was forced to put away her dream of being a nurse. She now has two children and because they cannot survive on her husband’s pay, she holds part-time jobs and works non-stop. Theirs is a harsh reality and she has to economise everyday. But she is a bright and cheerful mother to her children.

Taguchi Junnosuke as Hotta Katsuhiko
Hongo Sachiko’s high school schoolmate. A doctor who works at a general hospital. He is one of the “winners”, the exact opposite of Sachiko. One day, he meets her again for the first time in many years. After that, they see each other now and then. His candour and warmth repeatedly pricks at Sachiko who has led a difficult life and stirs her heart … …

Kuge Kokoro as Hongo Mako
This story’s narrator. The youngest child of the Hongo family. A first grade elementary school student. Her older brother’s words that the family will break down around the time Sky Tree is completed, gnaws at her and she is the only one worried about the family’s future. One day, she picks up a puppy and brings it home. Named ‘Sky Tree’, the puppy eventually becomes her buddy and begins to change this wretched family … …

Yamazaki Ryutaro as Hongo Dai
The unfortunate son who was born from the shotgun marriage that came about after his parents ran off together. He is somewhat coolly philosophical about the world and his pet theory is that his family will break down around the time Sky Tree is completed. He also has a strong desire not to make his parents worry about that and ends up covering it up with various lies.

This blog contains information and musings on current and upcoming Japanese dramas but is not intended to be comprehensive.
View all posts by jadefrost →
This entry was posted in Spring 2011 Dramas, TV Asahi and tagged Inu o Kau to Iu Koto, Mizukawa Asami. Bookmark the permalink.