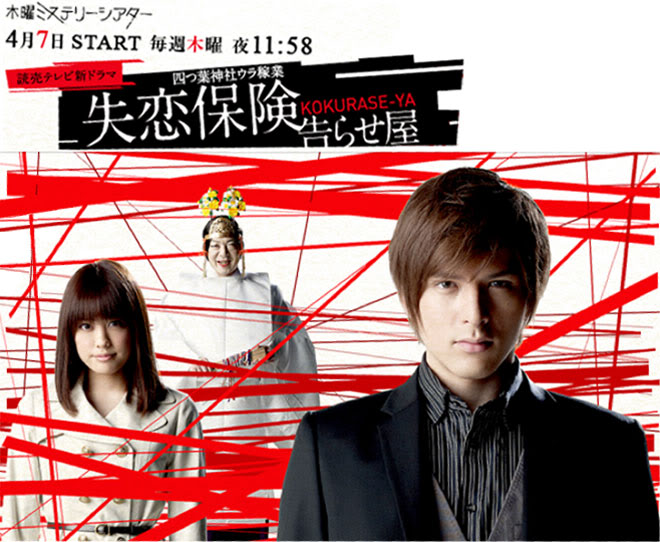 Story
“Heartbreak insurance” is a minimum of 1 million yen which is not refundable, and is insurance money 10 times the premium to soothe a member if he/she is dumped by the object of his/her affection after the confession or told to break up by the partner he/she is in a relationship with. Whether it is love at first sight or an unattainable, famous love interest, people can become a member as long as Tracho the effeminate chief priest of Yotsuba Shrine, which is responsible for the insurance, permits. However, people’s hearts are full of mystery. Another side of them, which they least expect, emerges from the point they are charged a large amount of cash for love, and seek compensation … … Misaki Yuko, an office lady, is consulting Tracho in the secret basement at the back of Yotsuba Shrine’s inner sanctuary. Yuko is in love with Kakiuchi Muneharu, a calligraphy teacher, but afraid to confess her feelings because she is always having her heart broken. She confides to Tracho that she will not be able to live with Kakiuchi’s rejection. Heartbreak insurance investigator, Maru, who is in the adjoining room behind a one-way mirror, reports Yuko’s situation to Luke via email. Agreeing to the membership condition of making her confession at a designated date and time, Yuko buys the insurance with a payment of 1 million yen. Tracho has a pep talk with Luke and Maru in order to make Yuko’s love a success because he does not want to pay a cent in insurance money. However, a darkness which thwarts Yuko’s own romances is hidden in her psyche. Sensing the gloom in her heart, Luke prepares a surprise confession place for her sake … …

Characters
Shirota Yu as Kazuki Ayumu
Nickname: Luke. A “heartbreak insurance” investigator for Yotsuba Shrine’s shady operations, he has known Tracho before the launch of this business. He usually lectures as an associate professor of animal ecophysiology at a university. He has a strong interest in the romances of the members of the heartbreak insurance. Through love psychology techniques, he bares their hearts and confronts love. The background behind the investigator role that he has taken, appears to be the existence of two females who have influenced his own destiny … …

Fukuda Saki as Maruyama Madoka
Nickname: Maru. A female university student who works part-time as a shrine maiden at Yotsuba Shrine. She was scouted by Tracho to be an investigator, on the strength of her good senses. Although she is the person in charge of engineering the romances of members, there are times when Madoka’s strong sense of justice and empathy makes her stand on their side. She is also responsible for pitching the “heartbreak insurance” as an urban legend.

Furuta Arata as Tokura Eitaro
Nickname: Tracho. The chief priest of Yotsuba Shrine and a gay. He is the boss of the shady “heartbreak insurance” business. He puts pressure on Luke and Maru to make all romances a success. Is he a money-mad person who does not want to spend a nickel on insurance money? Or is it because he wishes to save people who are troubled by unrequited love? No one knows his real intention.

This blog contains information and musings on current and upcoming Japanese dramas but is not intended to be comprehensive.
View all posts by jadefrost →
This entry was posted in NTV, Spring 2011 Dramas and tagged Fukuda Saki, Furuta Arata, Shirota Yu, Shitsuren Hoken. Bookmark the permalink.