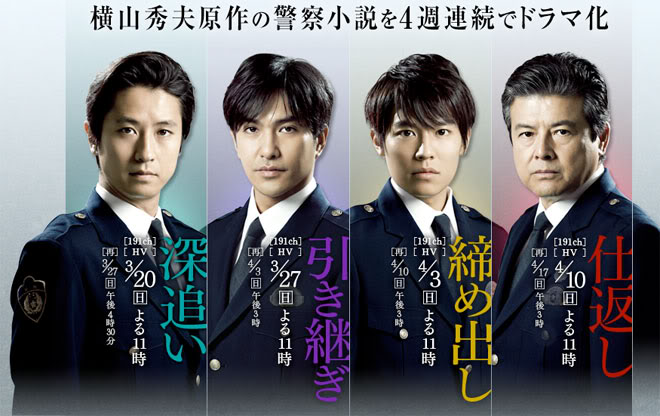 Fukaoi
Time: From 11.00 p.m., 20 March 2010
Cast: Tanihara Shosuke, Tsuruta Mayu, Sato Megumi, Ibu Masato
Synopsis: Akiba (Tanihara Shosuke) from the Traffic Division’s Accident Investigation Team at Mitsukane Police Precinct was demoted in the past. He had been the motorcycle police’s ace until that accident occurred. A suspicious car which he was chasing caused an accident, and a driver was killed in a fire. He discovers a photograph of his former girlfriend, Akiko (Tsuruta Mayu), from the personal effects at the scene of a traffic accident. The man who died in the accident is Akiko’s husband. Akiba, who is drawn to the ever beautiful Akiko, deviates from his professional duties and starts going to Akiko’s house. He even ignores the warnings of police chief Yamane (Ibu Masato) and colleague, Hiromi (Sato Megumi), and persistently pursues Akiko.
Website: www.wowow.co.jp/dramaw/yokoyama2/episode/fukaoi.html

Hikitsugi
Time: From 11.00 p.m., 27 March 2010
Cast: Kitamura Kazuki, Osugi Ren, Tsuda Kanji, Okada Yoshinori
Synopsis: Obana (Kitamura Kazuki) and Ogino (Okada Yoshinori) from the Criminal Affairs Division’s Burglary Team at Mitsukane Police Precinct, are after Nonomura, a young robber. One day, a robbery occurs within the jurisdiction of the precinct. Obana, who investigates the crime scene, suspects that it may be the work of the legendary robber, Iwamasa (Osugi Ren) and not Nonomura. It is because this is similar to Iwamasa’s modus operandi, which was written in the notes he inherited from his father, Keizo. Keizo had experience in nabbing Iwamasa and he had left behind those details. Obana proceeds with the investigation with his sights set on Iwamasa. However, Arisaka, his rival from the second team, is also chasing after Iwamasa.
Website: www.wowow.co.jp/dramaw/yokoyama2/episode/hikitsugi.html

Shimedashi
Time: From 11.00 p.m., 3 April 2010
Cast: Koide Keisuke, Kaneko Nobuaki, Ichikawa Miwako, Uehara Misa
Synopsis: Mitamura (Koide Keisuke) from the Community Safety Division’s Juvenile Team at Mitsukane Police Precinct has a thing for delinquency. This is because his girlfriend Mika (Uehara Misa) was taken away by a delinquent called Saiki (Kaneko Nobuaki) during his high school days. One day, a robbery-murder takes place at a pachinko. Mitamura suspects that the statement of the delinquent being interrogated is key to exposing the criminal. He investigates the surroundings of the scene with Tsuneko (Ichikawa Miwako) from the Traffic Division, but does not discover clues. With grim determination, Mitamura tries to propose that he participate in the investigation meeting for the case. However, he is shut out with the reason being that he does not belong to the Criminal Affairs Division.
Website: www.wowow.co.jp/dramaw/yokoyama2/episode/shimedashi.html

Shikaeshi
Time: From 11.00 p.m., 10 April 2010
Cast: Miura Tomokazu, Wakamura Mayumi, Furuta Arata, Shiraishi Miho
Synopsis: Matoba (Miura Tomokazu), the Deputy Chief of Mitsukane Police Precinct and his wife, Chisato (Wakamura Mayumi), are worried about their only son, Keita. Keita has been bullied by Takeshi, the son of their subordinate, Hamana (Furuta Arata). One day, the dead body of a homeless man is discovered in a park within the precinct’s jurisdiction. There is said to be no case from his subordinates’ report, but Matoba senses foul play from the words of the TV director, Akizuki (Shiraishi Miho). That man might have come to Mitsukane Police Precinct on the night he died. Matoba questions Hamana and other subordinates who had been on duty that night. However, their reply is that they had not seen the man.
Website: www.wowow.co.jp/dramaw/yokoyama2/episode/shikaeshi.html