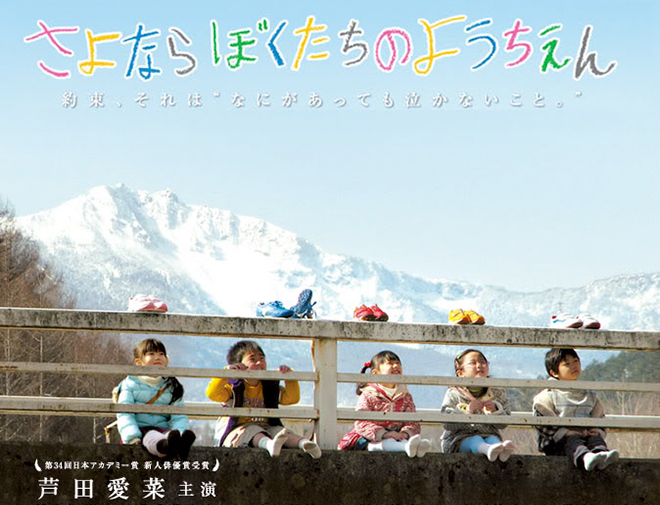 Date: From 9.00 p.m., 30 March 2011
Scriptwriter: Sakamoto Yuji (Soredemo Ikite Yuku, Mother, Chase)
Cast: Ashida Mana, Hashimoto Tomoya, Sato Ruiki, Honda Miyu, Kuroda Hiroyuki, Ihara Ryoka, Mitsushima Hikari, Mizuno Maki, Yokoyama Megumi
Synopsis: One day, Yamazaki Kanna (Ashida Mana), Uehara Takumi (Sato Ruiki), Mochida Mikoto (Honda Miyu), Horikawa Shunsuke (Kuroda Hiroyuki) and Kishimoto Yui (Ihara Ryoka) slip out from Hinata Kindergarten’s Violet Class in Tokyo. The five children are connecting on trains and headed to an unfamiliar place for some purpose without telling the adults. They board a train bound for Takao Station at Shinjuku Station. Before their journey, they had made a promise to each other “not to cry no matter what happens”. However, while changing trains at Takao Station, Yui gets left behind at the platform due to an accident. Their sudden disappearance causes a huge commotion at the kindergarten. Their teacher Yoshiki Mari (Mitsushima Hikari) is berated by their parents who have rushed over in a panic. Then there is a phone call informing them that Yui is in safe hands at Takao Station and Mari heads there with Yui’s mother (Yokoyama Megumi). When Mari hears from Yui where the five of them were going, she gets an idea and boards the Chuo line in pursuit of the other children.
Website: www.ntv.co.jp/youchien

This blog contains information and musings on current and upcoming Japanese dramas but is not intended to be comprehensive.
View all posts by jadefrost →
This entry was posted in NTV, Spring 2011 Drama Specials and tagged Ashida Mana, Mitsushima Hikari, Sayonara Bokutachi no Youchien. Bookmark the permalink.