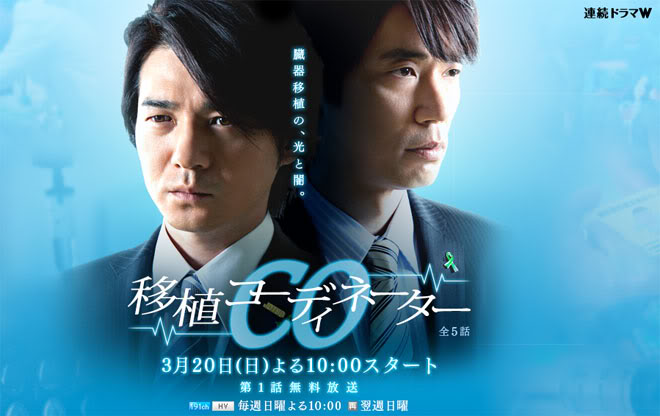 Story
Ohno Tatsuro has been an organ transplant coordinator for several years. He and his senior, fellow coordinator Kuramoto Kazufumi, cannot hide the conflicting struggles of medical transplants after a revision of the organ donation law. Pressured by the Ministry of Health for cases of successful transplants, Takenouchi Shintaro, the director of Takenouchi General Hospital gets desperate. Six-year-old Tachibana Kaito, who suffers from an enlarged heart and has been waiting for a transplant for four years, is hospitalised at an affiliated hospital. His mother, Miki, fervently hopes for a transplant surgery in the country as this is the only way left for him. Then one day, an accident occurs. Tezuka Takeru, a six-year-old, falls from the veranda of an apartment. He is immediately brought to Takenouchi General Hospital, one of the big hospitals in Tokyo, but is pronounced brain dead. There appear to be signs of unnatural fractures and bruises on Takeru’s body and it is suspected that he was ill treated. However, organ transplant from an abused and brain dead child is prohibited by law so Takenouchi gives a false report to the police … After the law is revised, thoughts begin to gather in many adults with the first incidence of a brain dead child under the age of 15. Ohno, who starts to realise this, is pitted against the families of the donors and the recipients … …