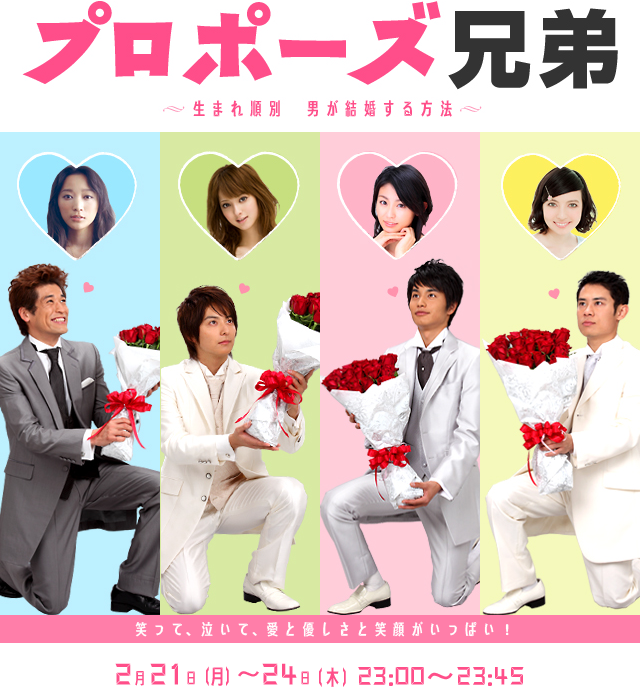 Date: From 11.00 p.m., 21 – 24 February 2011
Cast: Sato Ryuta, Anne, Koike Teppei, Sasaki Nozomi, Nakamura Aoi, Motokariya Yuika, Ito Atsushi, Becky
Synopsis: Yamada Ichiro (Sato Ryuta) is constantly dumped due to his inability to refuse a request – a natural characteristic of being the eldest child. “You’re too serious, it’s boring.” “Which is more important? Me or your work?” he would be told. One day, Sasaki Aya (Anne) arrives at ‘Kitchen Yamada’, which Ichiro has taken over from his parents. She hopes to get a part-time job at this western restaurant. Ichiro finds himself gradually attracted to the clumsy but enthusiastic Aya. Second brother Jiro (Koike Teppei) is a salaryman who is constantly jilted for being a coward because of his nature as the middle child to avoid challenges and choose the safe way, Jiro takes on his first challenge in order to win the heart of Watanabe Minami (Sasaki Nozomi), a receptionist at his parent company. Younger brother Saburo (Nakamura Aoi) is a freeter who is constantly dumped for being too emotionally dependent and for telling lies that are quickly exposed. His childhood friend, Ito Mao (Motokariya Yuika), is unable to keep herself from worrying about him, and treats him like a mother would. The job hunt that he had begun at the urge of Mao does not work out and he soon gives up. Does Mao’s persuasion reach Saburo? Tanaka Kazuo (Ito Atsushi), the cousin of the three Yamada brothers, is an only child and lives life at his own pace. He is an interior designer with a fertile imagination and wonderful talent. He has lived indulgently without feeling particularly lonely or falling in love. However, when he gets pushed around by Suzuki Saki (Becky), the eldest of six siblings who has come to his place as a contract staff, she gradually becomes a prominent presence in his life.
Website: www.fujitv.co.jp/propose-kyodai

This blog contains information and musings on current and upcoming Japanese dramas but is not intended to be comprehensive.
View all posts by jadefrost →
This entry was posted in Fuji TV, Winter 2011 Drama Specials and tagged Anne, Koike Teppei, Motokariya Yuika, Nakamura Aoi, Puropozu Kyodai, Sasaki Nozomi. Bookmark the permalink.