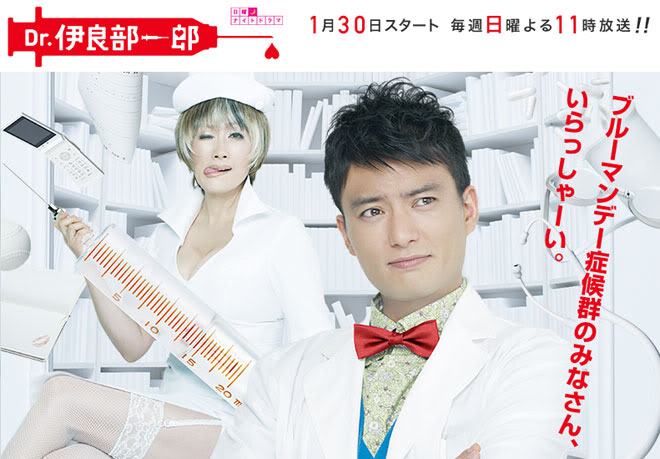 Story
Kano, the leader of a yakuza group, has the courage and spirit of a yakuza to be unfazed even if he is held at gun point. He has authority over those around him and plays tough. Recently, however, he for some reason or other gets unnerved when he sees sharp-pointed objects, and suffers from symptoms of nausea and breathing difficulties. Kano is alarmed that it will affect his life as a yakuza if this goes on. At the encouragement of Kazumi, his common-law wife, he visits the Department of Psychosomatic Medicine at Irabu General Hospital. Waiting at the department is the eccentric psychiatrist Irabu Ichiro, who happily greets patients “Welcome!” Kano struggles to be threatening and tries to keep up appearances, but Irabu and the nurse Mayumi pay no heed and gleefully give him an injection. Thrown off by their behaviour, Kano just listens to what seems like Irabu’s conjecture to “try wearing sunglasses since he is a yakuza” and leaves the hospital. However, the effectiveness of the sunglasses in protecting his eyes is fleeting, and the symptoms of his phobia progresses. Meanwhile, the Higashiyama Association to which Kano’s family belongs, is to make a blood petition in preparation for their fight with rival Kitsuan-gumi. The mere thought of cutting his finger with a dagger makes Kano cringe with fear. To satisfy his curiosity, Irabu offers, “If you cannot cut yourself, I’ll do it for you!”

Characters
Tokushige Satoshi as Irabu Ichiro
A 35-year-old psychiatrist who works at Irabu General Hospital’s Department of Psychosomatic Medicine. An eccentric who brightly greets patients with a high-pitched “Welcome!”, and happily gives them an injection unrelated to their medical treatment. Originally a pediatrician, the rather peculiar Irabu transferred to a different field of medicine because of the avalanche of complaints against him because of his constant quarrels with child patients. He became a psychiatrist. In truth, it seems that he has an obsession with injections. His father, the director of Irabu General Hospital as well as the director of the Japan Medical Association, has a lot of influence in many places and well-to-do. Irabu is self-absorbed and such a mother’s boy that he relies on her for the clothes to wear and even his marriage partner. He treats the patients who visits him through his simple-minded curiosity and imagination.

Yo Kimiko as Mayumi
A nurse who works as Irabu Ichiro’s assistant. Her age is not known. A beautiful mature woman who grabs attention with her distinct style and excessive exposure, but she is brusque and indifferent towards patients. Her private life is shrouded in mystery and various rumours fly about within the hospital. She appears unconcerned about Irabu’s seemingly nonsensical medical treatments and behaviour, but determinedly manages the child-like Irabu.

Hara Mikie as Irabu Akane
Irabu Ichiro’s ex-wife who is 11 years his junior. They became acquainted at a members-only matchmaking party and married, but their marital relations broke down in three months maybe because of Irabu’s eccentric personality and interests, and maybe because she had her eye on alimony from the start. She declares that she will not affix her seal to the divorce papers until she gets the money, and repeatedly comes to his place, but he has no intention of paying her.

This blog contains information and musings on current and upcoming Japanese dramas but is not intended to be comprehensive.
View all posts by jadefrost →
This entry was posted in TV Asahi, Winter 2011 Dramas and tagged Dr Irabu Ichiro, Yo Kimiko. Bookmark the permalink.