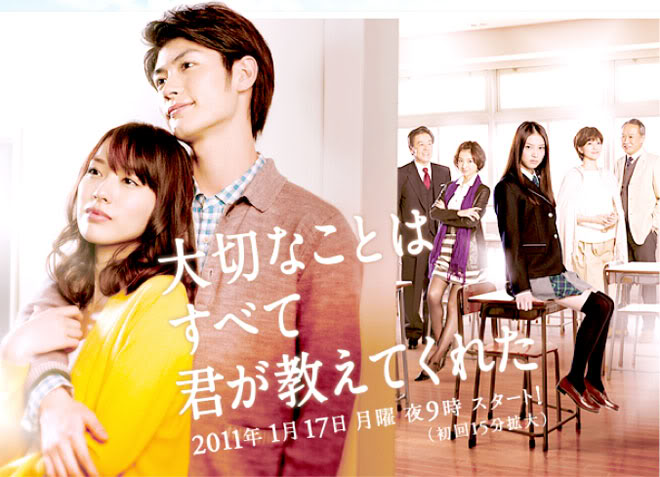 Story
English teacher Uemura Natsumi, who lived in the US until high school, is in charge of a class of first year students at the private Meiryo Gakuen Senior High School. Kashiwagi Shuji is Natsumi’s colleague and a biology teacher in charge of a class of second year students. Natsumi and Shuji were schoolmates in high school and university, and have planned to hold their wedding ceremony three months later. Their marriage has been blessed by their colleagues and students, and they are in bliss. On the morning of the start of the new school term, Shuji awakens and realises that a young female stranger is sleeping naked next to him. Learning that he had just met this girl at a bar last night, and was intimate with her when drunk, Shuji panics. Although reluctant to leave a girl he is not familiar with alone in his house, Shuji hands his house key to her and hurriedly rushes out as he is about to be late for school. He desperately suppresses the feelings of guilt and regret that he feels toward Natsumi and goes to school pretending like nothing happened. The vice principal and teachers in charge of the other second year classes are in the staff room busily preparing for the new school term. Natsumi is also in a meeting with the rest of the first year form teachers. When Shuji takes attendance, he learns that two students, Saeki Hikari and Sonoda Nozomi, have not arrived at school yet. Then at that moment, a female student enters the classroom late. It is Hikari. Shuji instructs the students to move to the gym where the opening ceremony will be held. Hikari, who has remained in the classroom all the way, suddenly calls out to Shuji and shows him something in her hand. It is Shuji’s house key! Realising that the girl he had been with until this morning is Hikari, Shuji is lost for words and can only stare at her dazedly …

Characters
Miura Haruma as Kashiwagi Shuji
A biology teacher in charge of a second year class at Meiryo Gakuen Senior High School. An earnest, reflective, serious thinker who does not guide with morals and common sense, but reaches out to his students with his own words. He is tremendously popular with his students and also has the confidence of their parents as well as his fellow colleagues. He has many fans among his female students and their parents for his refreshing, cool looks too. An indecisive person, he respects his fiance, Natsumi, who possesses the determination and ability to get things done, and considers her important to him. However, on the day before the new school term, he has a relationship with Saeki Hikari, a student in his new form class. As a result, the relationship he has built with Natsumi and his standing in the school is threatened. After making this mistake, he attempts to demonstrate the sincerity of his love for Natsumi, but on the other hand, his agony grows over his increasing desire to protect Hikari as he learns of her loneliness and emotional scars.

Toda Erika as Uemura Natsumi
An English teacher in charge of a first year class at Meiryo Gakuen Senior High School. She is also adviser to the female basketball club, but is a total outsider to basketball. Her days are fulfilling as it had been her dream to be a teacher. Cheerful, positive and candid, Natsumi is popular with her students. She acts confidently and responsibly with regards to her own choices. Her marriage to fellow teacher, Kashiwagi Shuji, is three months away. They enjoy a reputation as a “good looking couple” and their marriage is blessed by their students as well as colleagues. She always takes the lead in her relationship with Shuji and is deeply in love with him. The relationship between Shuji and his student, Saeki Hikari, makes her come to know that she has a jealous and cruel side. She starts to doubt Shuji’s love and her despair grows. She ends up hating herself and has to come to terms with her own self again.

Takei Emi as Saeki Hikari
A second year student at Meiryo Gakuen Senior High School. She, for some reason, is under the impression that she is “defective goods” and has an inferiority complex. She gets close to Uemura Natsumi after she has a relationship with Kashiwagi Shuji the day before the opening ceremony for the new school term, and tears the two of them apart by driving them to the wall. At the root of this action is yearning and jealousy, the mixed feelings of love and hate that she has for their relationship.

Uchida Yuki as Mizutani Aya
A nurse who works at a general hospital. She has been concerned about Saeki Hikari ever since she met her four years ago. Her feelings for Hikari go beyond that of nurse and patient and is sometimes that of a mother’s. She is also important to Hikari who can talk to her about anything. However, ever since the day that Hikari had a relationship with Kashiwagi Shuji, Aya feels loneliness (in Hikari’s emotional distance) as well as genuine concern. After she learns of Hikari’s relationship with Shuji, she supports and encourages her more than ever.

Kazama Morio as Tsuruoka Satoshi
The vice principal of Meiryo Gakuen Senior High School. He has a gentle nature and is a good leader equipped with a broad mind and calm judgment. When problems occur, he will always deal with it in a levelheaded manner. He listens to the opinions of different people. and never makes an unfair decision. He acknowledged the aptitude of Uemura Natsumi and Kashiwagi Shuji as teachers and warmly watches over them. When they encounter difficult situations in their respective classes, he will unerringly support them. He is delighted about the impending marriage of Natsumi and Shuji who were his former students. However, he agonises over the disciplinary action for Shuji after the relationship between Shuji and Hikari becomes known.

Suda Masaki as Hiraoka Naoki
A second year student at Meiryo Gakuen Senior High School. He belongs to the male basketball club and is a big fan of Uemura Natsumi. He is cheerful, straightforward and the type who immediately acts as he thinks. That sometimes is the reason why he trips up. There are moments when Natsumi thinks of his feelings as trouble, but later finds solace in her time with him.

Shinoda Mariko as Todo Sayaka
A wedding planner. A planner who is so popular that she is booked more than one year in advance. She was university schoolmates with Uemura Natsumi and Kashiwagi Shuji, and shares an apartment with Natsumi. Shuji and her had dated when they were in university and had even thought of marriage. Because she is now good friends with Natsumi and Shuji, she congratulates the two of them on their marriage and undertakes the planning of their wedding. However, her feelings for Shuji linger deep in her heart, and it sometimes pains her to see the happy couple.

This blog contains information and musings on current and upcoming Japanese dramas but is not intended to be comprehensive.
View all posts by jadefrost →
This entry was posted in Fuji TV, Winter 2011 Dramas and tagged Miura Haruma, Suda Masaki, Taisetsuna Koto wa Subete Kimi ga Oshietekureta, Toda Erika, Uchida Yuki. Bookmark the permalink.