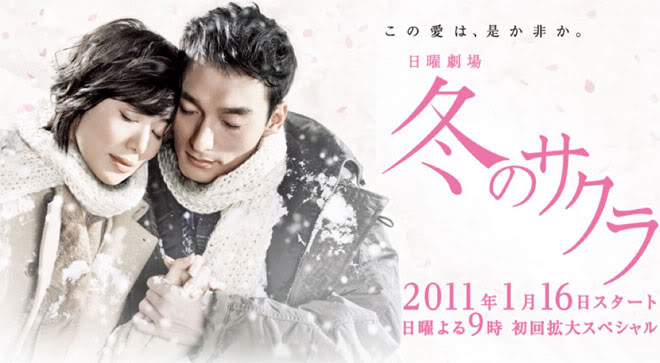 Story
Inaba Hiroshi, a glass craftsman in snow-covered Yamagata prefecture who has devoted himself to caring for his mother, has never fallen in love before. Ishikawa Monami has travelled alone to Yamagata prefecture. She has journeyed to see the “sakuras that bloom in winter”. Hiroshi passes Monami as she walks down the street, and is captivated by her beauty. Right after that, her handbag is snatched and Hiroshi helps an injured Monami. Monami, who has suddenly lost her memory because of the shock of the incident, begins living at Hiroshi’s home. Monami is in a daze of fear and terror as she cannot be identified and does not know who she is. The only clue is a photograph of a sakura branch which was taken with the digital camera she has. It is the keiousakura, a flower which blooms in winter. A man who has only looked after his mother, and a woman who does not even know who she is … … these two predestined people have encountered each other in a quiet, white snow-covered world. Hiroshi’s mother passes away a while later, and his younger brother, Hajime, a houseman at a Tokyo hospital, returns for the funeral service. Sensing his older brother’s faint liking for Monami, Hajime tells Monami about Hiroshi’s sincere care for his mother and him. Hajime has a girlfriend called Mukai Anna who is a nutritionist at the same hospital. The two of them secretly watch over Hiroshi and Monami, but … Meanwhile, Monami recalls everything as a result of news identifying her. And that she has a husband and daughter … … Monami’s husband, Koichi, arrives to pick her up and she returns to Tokyo with heart-wrenching memories. Hiroshi sends her off from a distance with a gentle smile. However, Koichi perceives Hiroshi’s existence and suddenly changes …

Characters
Kusanagi Tsuyoshi as Inaba Hiroshi
A glass craftsman who lives in Yamagata prefecture. He has devoted himself to caring for his bedridden mother who suffers from dementia. An earnest person by nature, he leads a simple life working and caring for his mother. That may be the reason why he has not experienced love. However, he falls in love with Ishikawa Monami, a sophisticated beautiful woman whom he meets by coincidence.

Imai Miki as Ishikawa Monami
She lost her memory in a purse snatching incident while on a solo trip in Yamagata prefecture, and goes to stay with Inaba Hiroshi, who helped her.

Sato Takeru as Inaba Hajime
Inaba Hiroshi’s younger brother. Sick of living with his mother, he goes up to Tokyo and becomes a doctor. He returns home after a long time because of his mother’s funeral service, and comes in touch with his brother’s kindness.

This blog contains information and musings on current and upcoming Japanese dramas but is not intended to be comprehensive.
View all posts by jadefrost →
This entry was posted in TBS/MBS, Winter 2011 Dramas and tagged Fuyu no Sakura, Kusanagi Tsuyoshi, Sato Takeru, Takashima Masanobu. Bookmark the permalink.