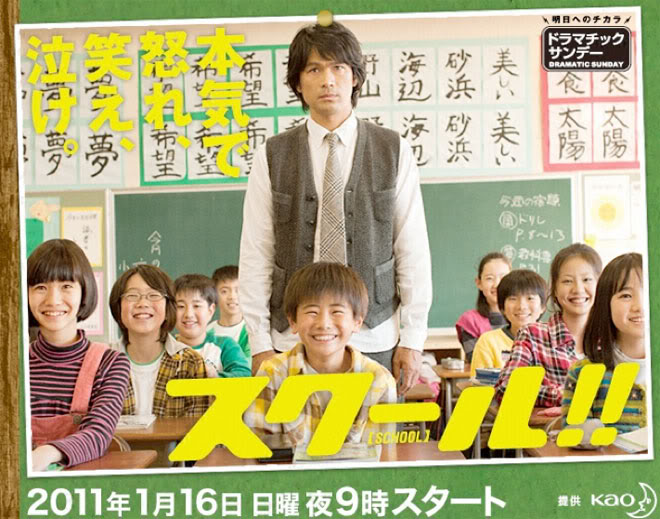 Story
Naruse Seiichiro has worked at a medium-sized construction company for 20 years, and had devoted himself to a life of outdoor work. However, that construction company went bankrupt. Then, Naruse receives an offer to be the principal of the public elementary school which had been his alma mater, at the recommendation of Takechi Kanjo, his elementary school teacher. He is bewildered by this unexpected proposal, but upon learning that it is the earnest wish of his former teacher, he gallantly accepts the offer. And so, Naruse arrives at his alma mater, Shingu Elementary School, for the first time in 30 years. What he sees is one boy being bullied by a number of children. The bullies throw out all the contents of the boy’s bag and try to light a fire with a lighter. Naruse scolds the bullies but they ignore him. Even the boy who had been bullied declares that he was not being picked on. Naruse tells a girl holding the lighter to pass it over to him but she refuses. In the struggle that ensues, the girl sets off her anti-theft buzzer. Security officers appear from within the school grounds at the piercing sound and Naruse is detained. At that moment, Kirihara Iori, the form teacher for the sixth grade and the curriculum coordinator; part-time teacher Takechi Kanoko; vice-principal Wakiya Kujuro and other teachers are waiting in the staff room for the arrival of the new principal. At the staff room, Naruse, who managed to get himself released, reports the bullying that he had seen earlier, but far from being shocked, the teachers do not take it seriously and wonder if affixing ‘san’ to a student’s surname is really bullying. The next day, Naruse delivers a speech to the children as the principal of Shingu Elementary School. While Naruse is standing on the stage of the gym talking, the children start to sit down noisily. Ohashi Hitoshi, the form teacher for the fifth grade, explains to an astonishe Naruse that they are allowed to sit when they are tired, forcing them to stand now would be physical punishment … …

Characters
Eguchi Yosuke as Naruse Seiichiro
He has worked as the manager of civil engineering sites for a medium-sized construction company for 20 years. A sunny person. Called the “eternal boss of the neighbourhood kids” and “a man among men” by the people around him. After the construction company he had worked in went bankrupt, he is asked by Takechi Kanjo, his teacher from elementary school days, to be a school principal in order to save his alma mater, Shingu Elementary School. He stays with the Takechi family after taking on the position.

Nishijima Hidetoshi as Kirihara Iori
The form teacher of Shingu Elementary School’s sixth grade and the curriculum coordinator. He is also viewed as a super elementary school teacher by the district’s education committee. He took up this position at Shingu Elelmentary School four years ago. Because he has raised the school’s percentage of students going on to secondary schools, even the vice principal has heavy expectations. He observes the students and understands what happens in class.

Kitano Kii as Takechi Kanoko
A granddaughter of the Takechi family. Her personality is the embodiment of “ordinary”. Her parents passed away when she was a child, and she and her older sister Yuriko were raised together by their grandfather, Takechi Kanjo. She works as a part-time teacher at Shingu Elementary School because of the influence of her grandfather who had been the former school principal.

Tsukamoto Takashi as Ohashi Hitoshi
The sports-oriented form teacher of Shingu Elementary School’s fifth grade. He tries to get on with Naruse Seiichiro, Kirihara Iori and the vice principal Wakiya Kujuro. He is good with computers and is in charge of checking unofficial bulletin boards on the school. Although he pretends to be a cheerful and spirited teacher, he is actually timid and a person of low calibre.

Miura Shohei as Motoki Yuichi
A young teacher who came to Shingu Elementary School in April last year. A business-like character common these days, he carries out everything flawlessly. He is a typical salaried teacher who believes it best to follow vice principal Wakiya Kujuro, the person with real authority. He wishes to get a job with the education committee rather than in the classroom.

Horiuchi Keiko as Yoshimura Yuriko
A granddaughter of the Takechi family and Kanoko’s older sister. She is living apart and staying at her family home because of her husband’s infidelity. She seems quiet, but is actually a person of firm character. She manages the house with her straightforward personality, and supports Naruse Seiichiro.

This blog contains information and musings on current and upcoming Japanese dramas but is not intended to be comprehensive.
View all posts by jadefrost →
This entry was posted in Fuji TV, Winter 2011 Dramas and tagged Eguchi Yosuke, Kishibe Ittoku, Kitano Kii, Miura Shohei, Nishijima Hidetoshi, School!, Tsukamoto Takashi. Bookmark the permalink.