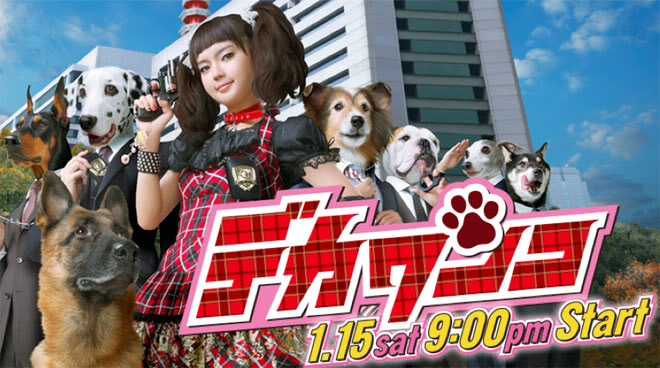 Story
A body which plunged to death is discovered between two buildings in Tokyo. The Thirteenth Section of the Tokyo Metropolitan Police’s First Investigative Division rushes to the scene. Among the dependable detectives is a girl dressed in gothic lolita clothes! She is Hanamori Ichiko, nicknamed Wanko, the burden of the Thirteenth Section. She has been assigned as the only female detective in a section with individualistic males like Shigemura Kannichi, Kirishima Ryuta and Wada Jun. Ichiko is snubbed at the crime scene. However, she has a special ability. It is her dog-like sense of smell. The victim is Namba Koji, a freelance advocacy journalist. The police dog Michael identifies the building which the victim fell from. The Thirteenth Section quickly get up to the rooftop of the building. Over there, Wanko sniffs a scent that she is unprepared for. In order to confirm the owner of the scent, she slips out of the investigation meeting and visits some person. That person is Matsuda Hiroo, the police commissioner of the Tokyo Metropolitan Police! Because of her sense of justice, Wanko is not intimidated despite his power. Then, the case heads in an unexpected direction … …

Characters
Tabe Mikako as Hanamori Ichiko
The only female detective of the Thirteenth Section. Nickname: Wanko. Her dog-like sense of smell is her weapon, but she has poor reflexes and deductive powers. She loves detective dramas and is a naive person. She wears gothic lolita clothes even during investigations and would hurl herself into probes. She and the police dog Michael are good rivals as well as good partners.

Sawamura Ikki as Shigemura Kanichi
Assistant Inspector, Thirteenth Section. An orthodox senior detective. He perceives the nature of a suspect at a glance and possesses the art of transforming himself into various characters to suit suspects. There has not been a suspect who has owned up in a Shige-san interrogation so far.

Tegoshi Yuya as Kirishima Ryuta
Constable, Thirteenth Section. A non-career officer. Nickname: Kiri. It has been a year since he was assigned to the First Investigative Division. A mischievous, young detective who is quick with his fists. He initially responds negatively to Wanko, but gradually gets caught up in her pace and grows together with her.

Ishizuka Hidehiko as Wada Jun
Sergeant, Thirteenth Section. His nickname is ‘Chanko’ because he was from a sumo stable. He is feared by everyone because he has a large build and scary face, is taciturn and does not smile. He always smells of alcohol because he is a heavy drinker.

Ito Shiro as Matsuda Hiroo
Commissioner of the Tokyo Metropolitan Police. The person who created the opportunity for Wanko to seek a career as a detective. Even though he is the commissioner, he still active at work. He values Wanko’s latent potential and secretly supports her.

This blog contains information and musings on current and upcoming Japanese dramas but is not intended to be comprehensive.
View all posts by jadefrost →
This entry was posted in NTV, Winter 2011 Dramas and tagged Deka Wanko, Fukikoshi Mitsuru, Ito Shiro, Sano Shiro, Sawamura Ikki, Tabe Mikako. Bookmark the permalink.