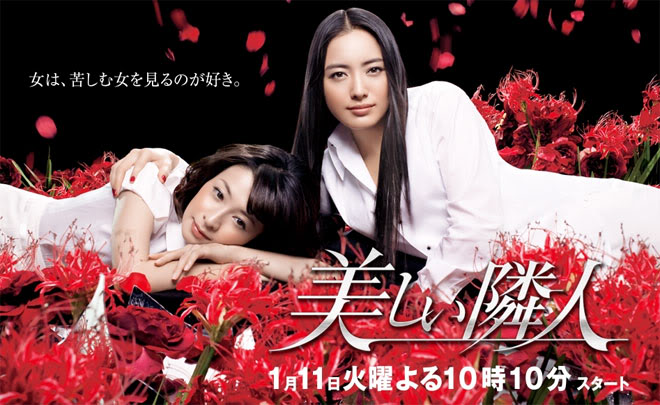 Story
Shun, the young son of Yano Eriko, a housewife who lives at a new residential area in the suburbs of Tokyo, disappears from the house. She soon receives a call from the police about the discovery of a boy’s body in a pond. A terrified Eriko breaks down crying against the chest of her husband, Shinji who has rushed over from Osaka where he works away from the family. However, the dead body is someone else. Shun has been cared for by a youth called Matsui Rio, and is found safe and sound. A year later, the Sekis, a couple who lives next door to Eriko, moves out and their house is leased. Feeling uneasy about the absence of her friendly neighbours, Eriko starts to consider moving to Osaka where Shinji is. After a while, a woman called Meyer Saki moves in next door. Saki’s husband is working in America and she will live alone in the meantime. Eriko immediately opens her heart to the cheerful and affable Saki whose circumstances are similar to hers, but Shun for some reason displays aversion. One night, Eriko’s house suddenly suffers a power outage. A suspicious Eriko goes outside. Saki approaches her from the back … The next night, Saki appears in front of Shinji, who is visiting a friend’s bar in Osaka … …

Characters
Nakama Yukie as Meyer Saki
A mysterious woman who moves into the house next to Yano Eriko. She is modest, somewhat enigmatic and captivating. However, she has some dark side which gradually bares its teeth. As she penetrates Eriko’s family and friendships little by little, the trust that the surrounding people have in Eriko gets destroyed, and Eriko’s happy life becomes threatened …

Dan Rei as Yano Eriko
A full-time housewife of a family of three (her husband, Shinji, and their son, Shun). She met Shinji when she was an office lady. They married and built an ordinary but happy family. She is an industrious woman who works to be a good wife and mother. She participates in “Attracting fireflies to the neighbourhood’s rivers”, which are the ecology activities of the ‘Hotaru Association’ and writes a blog that is like a diary. She unfortunately gets targeted by Meyer Saki …

Watabe Atsuro as Yano Shinji
Yano Eriko’s husband. A salaryman who works for a major consumer electronics manufacturer. He is gallant man, cares for his subordinates and is well-liked. He has now been promoted to Osaka and taken up a post away from his family. Right after he took on his new post, he would return to Tokyo during the weekends. However, his visits grew less frequent as he became busy with work. At that moment, he encounters an enigmatic, beautiful woman with a dark side and gets drawn to her …

Miura Rieko as Aida Mayumi
Yano Eriko’s neighbourhood friend who lives in the same block. She and her husband, Aida Kazufumi, have converted one of the houses into a cafe which they operate. Their daughter, Mio, and Eriko’s son, Shun, attend the same kindergarten, and they are close family friends with the Yanos. Candid and caring, Mayumi assists Eriko, who has no male help because her husband has been transferred to a new post away from home.

Suzuki Sawa as Seki Kana
Yano Eriko’s former neighbour and good friend. She and her husband, Seki Akihiro, moved to his hometown of Osaka in order to look after his father. Meyer Saki began living in the house after that.

Minami Keisuke as Matsui Rio
A waiter at the cafe run by the Aidas. He is usually silent and his background is not known. He exudes an air that keeps people away but is very attached to the Yanos son, Shun. Does he know Meyer Saki’s past?

This blog contains information and musings on current and upcoming Japanese dramas but is not intended to be comprehensive.
View all posts by jadefrost →
This entry was posted in Fuji TV, Winter 2011 Dramas and tagged Dan Rei, Nakama Yukie, Suzuki Sawa, Utsukushii Rinjin, Watabe Atsuro. Bookmark the permalink.