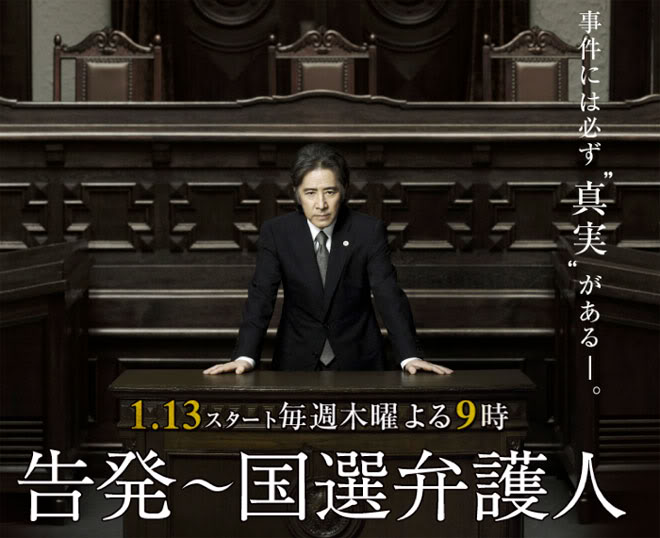 Story
On the night of Christmas eve, the lawyer Sahara Takukichi searches around for a woman called Kishida Reiko. Six months ago, Reiko charged that she had been raped by Sahara’s friend Okabe Masaya, who was in the midst of pursuing the illegal donations of Fujio, an influential Diet member. Sahara desperately tried to defend Okabe and clear his name, but Reiko fled while during a court recess, and has remained missing. Okabe was expelled from the bar association and fell into disgrace as a result of that incident. From that day on, Sahara has continued to search for Reiko for the sake of Okabe. Meanwhile, Okabe passes him the indictment of Akahori Namiko, who has been charged with the murder of her husband, Yuzo, who is the president of a major construction company. Namiko had been rebuked by him for the rapid downturn of the business due to a change in political administrations. In her anger, she had stabbed him with a sword. Sahara’s instinct tells him that Okabe would not have brought this case to him without a reason. He finds out that Yuzo was being secretly investigated by the Special Investigative Division of the Tokyo Public Prosecutor’s Office for his illegal donations to Fujio. This murder is linked to Okabe’s case, and his defense of Namiko is tied to Okabe’s salvation. Sahara, who believes in that, decides to take up the role as Namiko’s court-appointed attorney and take action for Okabe’s revenge!

Characters
Tamura Masakazu as Sahara Takukichi
A court-appointed attorney – a lawyer elected under a provision in the Constitution for defendants who are unable to request a lawyer due to financial and other reasons. He is an upright lawyer who takes no account of fees, and helps the weak to bring down the strong. His carelessness led to his wife’s murder by a client.

Maya Miki as Tanaka Junko
Younger sister of Sahara Takukichi’s dead wife. She runs the jazz bar ‘Swing’ and helps at Sahara’s law firm in the day. She also provides the Sahara family with financial as well as emotional support.

Aibu Saki as Sahara Tsuruko
Sahara Takukichi’s only daughter. A member of of an international medical peace corps. Her relationship with her father has not been cordial since her mother passed away.

Kondo Yoshimasa as Tsuruoka Kenji
A lawyer with Sahara Takukichi’s law firm. A former detective, he is good at secret investigations.

Matsuo Toshinobu as Tomita Hiroshi
A lawyer with Sahara Takukichi’s law firm. He used to be Okabe Masaya’s subordinate.

Hashizume Isao as Okabe Masaya
Sahara Takukichi’s old friend and an ace lawyer. He has fallen from grace ever since he was prosecuted for the rape of a female client, and expelled by the bar association.

This blog contains information and musings on current and upcoming Japanese dramas but is not intended to be comprehensive.
View all posts by jadefrost →
This entry was posted in TV Asahi, Winter 2011 Dramas and tagged Aibu Saki, Hashizume Isao, Kokuhatsu, Matsu Takako, Maya Miki, Tamura Masakazu. Bookmark the permalink.