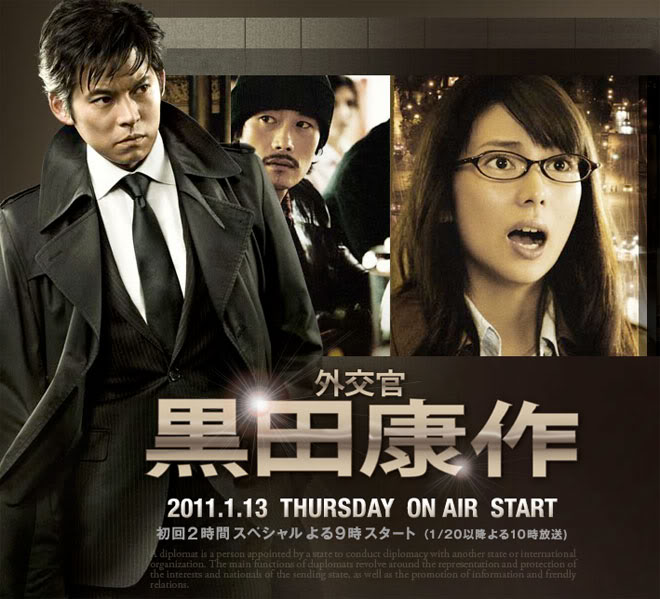 Story
Kuroda Kosaku, a diplomat with the Japanese Ministry of Foreign affairs receives secret orders from his superior, Ando Yosuke, to protect Japanese nationals, and moves from place to place around the world. Kuroda solves a case involving the kidnapping of a Japanese in South America, and heads to San Francisco next. His objective is to protect Mikami Shoko, the Vice Minister of Foreign Affairs, who is visiting to attend the WTO negotiations on agriculture. Kuroda, who enters San Francisco and checks on the security at the meeting, meets John, an informant, and listens to the movements of the FBI. After that, he meets Shimomura Takeshi, a former diplomat, again. Shimomura and Kuroda have a close connection from their work at the consulate in Mexico 11 years ago. When they part, Shimomura leaves Kuroda with the cryptic words, “I’m sorry”. At that moment, the murder of a university professor occurs within the jurisdiction Tsukuda Police Precinct in Japan. Detective Ogaki Rikako of Tsukuda Police Precinct is the first person to discover the dead body. Rikako is bothered by the time of the dead body’s discovery and tells her boss about it, but is ignored. At the negotiation meeting, the Vice Minister appears to be attacked by radicals. However, Kuroda’s tact saves the day. How did the radicals infiltrate so easily? Kuroda, who suspects they had a man on the inside, is notified that a Japanese has jumped to his death … That man is Shimomura! Meanwhile, a suspect surfaces in the murder that occurred within Tsukuda Police Precinct’s jurisdiction from the footprints, fingerprints and articles left at the scene. The suspect is Shimomura. Rikako goes to San Francisco with his daughter, Rui, in order to identify Shimomura’s body and the evidence. Kuroda is waiting for the two of them …

Characters
Oda Yuji as Kuroda Kosaku
A diplomat with the Ministry of Foreign Affairs’ Counter-Terrorism Office who wanders from consular offices in country to country as a First Secretary. He has remarkable judgment and energy, but to government officials who prefer peace at any price, he is considered a nuisance in every consular office. However, he keeps faith in his secret mission of protecting the lives of his fellow countrymen and is isolated from the people around him. He has doubts about Shimomura Takeshi’s death, and begins to investigate this mysterious case, which transcends national borders, with Ogaki Rikako.

Shibasaki Kou as Ogaki Rikako
A detective at Tsukuda Police Precinct’s Criminal Affairs Division. She has liked looking at maps since she was a child and her hobby is to tour the hot springs throughout the country with her parents who run a bath house. She has no confidence in herself, and is a bumbling and somewhat eccentric detective. Because of the precision of the investigation maps that she makes, she is very popular within her police precinct. She frets about not being allowed to take part in investigations since she is a half-baked detective. However, when she creates investigation maps, her heart beats fast at the thought that the key evidence and witnesses of the cases lie within. Because she was the first person who discovered the murder which set off a chain of incidents, she ends up helping Kuroda Kosaku.

Kaho as Shimomura Rui
Shimomura Takeshi’s daughter. A high school student who belongs to a brass band. She has been living with her father, Shimomura Takeshi, who quit the Ministry of Foreign Affairs and started “Borderless Aid” after her mother died in an incident in Mexico 11 years ago. However, she has not had a parent-child conversation with her workaholic father in recent years. She does not open her heart to people more than necessary.

Kusakari Tamiyo as Mikami Shoko
The young Vice Minister of Foreign Affairs. She quit her job as a news announcer and ran in the elections. In the second election, she was appointed the Vice Minister of Foreign Affairs of the new cabinet after a change in the administration. Her words and actions are the focus of national attention every time. A shrewd person who will stop at nothing to achieve successful deals. Learning that Kuroda Kosaku has returned to Japan because of an incident which occurred in San Francisco, she prepares a post for him at the Ministry of Foreign Affairs in the belief that she will be able to have a grasp of the actual situation at the Counter-Terrorism Office with him nearby.

Kagawa Teruyuki as Shimomura Takeshi
The chairman of ‘Borderless Aid’, a non-profit organisation. A former diplomat who previously worked with Kuroda Kosaku in Mexico, and he has a medical license from back then. Driven by his belief that medicine is for the international community, he worked tirelessly even in Mexico. However, he began to feel encumbered as a diplomat who could only treat citizens of his own country, and quit the Ministry of Foreign Affairs after his term in Mexico. He now practices medicine in war zones all over the world together with the non-profit organisation. He visits San Francisco to attend a briefing organised by the WHO on new strains of infectious diseases and meets Kuroda again. Because his wife has passed away, his daughter Rui, who lives in Japan, is his only family. He was a suspect in a murder which took place in Japan, but is later confirmed dead in San Francisco.

This blog contains information and musings on current and upcoming Japanese dramas but is not intended to be comprehensive.
View all posts by jadefrost →
This entry was posted in Fuji TV, Winter 2011 Dramas and tagged Gaikoukan Kuroda Kosaku, Kagawa Teruyuki, Kaho, Kusakari Tamiyo, Oda Yuji, Shibasaki Kou, Tanaka Kei. Bookmark the permalink.