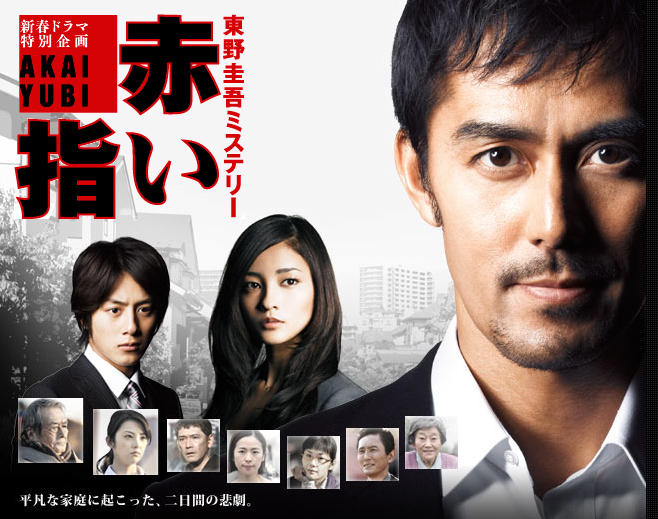 Date: From 9.00 p.m., 3 January 2011
Cast: Abe Hiroshi, Kuroki Meisa, Mizobata Junpei, Sugimoto Tetta, Nishida Naomi, Tomita Yasuko, Matsushige Yutaka, Sasaki Sumie, Tanaka Rena, Yamazaki Tsutomu, Takito Kenichi
Synopsis: Two years before Kaga Kyoichiro (Abe Hiroshi) took up his post at Ningyocho, a shocking incident triggers a tragic chain of events that befall an ordinary family of four. 47-year-old Maehara Akio (Sugimoto Tetta) is a commonplace company employee who has been avoiding problems in his family. He feels reluctant to go home every day. The dread of dealing with his elderly mother Masae (Sasaki Sumie) who has dementia, and his wife Yaeko (Nishida Naomi) and teenage son Naoki who are no longer speaking to him weighs heavily on him. One night, Akio receives a phone call from his wife who usually would not call him up. When he answers, she is uncharacteristically flustered and says that she wants him to come home. Akio has a bad feeling about this. He returns home to find the body of a girl in the garden. Unable to grasp the situation, he confronts Yaeko and learns that Naoki was involved in the girl’s death. Akio tries to cover up the matter after Yaeko presses him to protect the family. He ends up carrying his family’s tragedy on his shoulders as a psychological battle unfolds between himself and Kaga who has been put in charge of the case together with Matsumiya Shohei (Mizobata Junpei). In order to get the Maeharas back to being a genuine family, Kaga disentangles the complex web of family interactions with his keen perception. Just when it is determined that the case has been solved … …
Website: www.tbs.co.jp/shinzanmono/akaiyubi

This blog contains information and musings on current and upcoming Japanese dramas but is not intended to be comprehensive.
View all posts by jadefrost →
This entry was posted in TBS/MBS, Winter 2011 Drama Specials and tagged Abe Hiroshi, Shinzanmono Series. Bookmark the permalink.