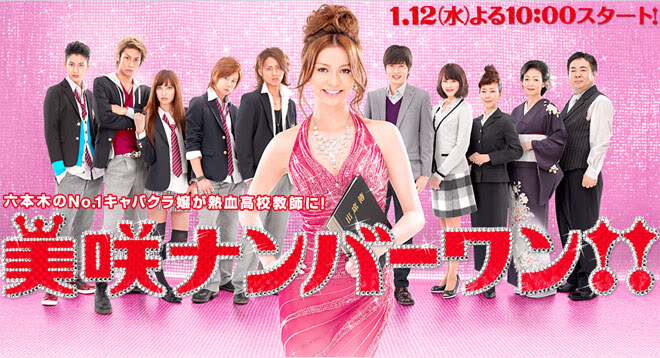 Story
Tennoji Misaki, a club hostess who has climbed her way to be the number one in Roppongi, transforms into Midori Gakuen’s high school teacher at the request of the club’s female proprietress. She covers up her background as a former hostess and goes to Class 2Z, the form class which she has been put in charge of, but the classroom is empty. In truth, Class 2Z is a special class in which problem kids have been gathered. The rebelliousness of Kujo Kazuma, Minato Ryosuke and the rest of the 27-strong students of Class 2Z, fires the passion in Misaki’s heart … …

Characters
Karina as Tennoji Misaki
Mido Gakuen’s new teacher who is put in charge of Class 2Z, a class is full of problem children. She was actually the number one hostess of Roppongi’s ‘Club Southern Sea’ but suddenly became a teacher one day at the request of “Mama” whom she feels indebted to. Well-meaning and meddlesome, she cannot stand to ignore people who are in trouble. She became a hostess because her boyfriend is in debt. Although she has transformed into a high school teacher, she wears flashy clothes.

Fujigaya Taisuke as Kujo Kazuma
The leader of Class 2Z. He is always ready for a fight but cares for his friends. A hot-blooded guy who will plunge right into any trouble. He reacts defiantly with all adults because he is hopeless. He initially rebels against Misaki all the time too, but … …

Kitayama Hiromitsu as Minato Ryosuke
A student in Class 2Z. The mood maker of the class because of his lively personality. A grown-up, cool guy in some respects. The famous partner who is able to restrain the reckless Kujo Kazuma. He has been friends with Kujo and Sakurai Yui since elementary school, and also plays the role of the peacemaker of the group of five. Although he has a cheerful disposition, he has family problems behind the scenes.

Omasa Aya as Sakurai Yui
A student in Class 2Z. The only girl in the five member group and the most mature among them. She is a beauty but has a tough, boyish and candid personality who makes sharp digs at guys’ actions. Because she has been friends with Kujo Kazuma and Minato Ryosuke since elementary school, she is more at ease with Kujo and Minato than with girls, and finds them fun.

Ichikawa Tomohiro as Nagase Kyotaro
A student in Class 2Z. He has a quick temper and simple personality, not considering the consequences of his actions. A silly person who has a lovable character. Although he talks big, he is poor at fights for a person of his size.

Ohno Takuro as Hoshida Yuto
A student in Class 2Z. A flashy, frivolous person. He has completely no self-awareness and is rather prone to making silly mistakes. He enrolled on a basketball scholarship, but soon quit the team because of injury. He has lost his motivation in everything ever since then and falls behind. His nickname is “Hosshi”.

Tanaka Kei as Mikuni Takeshi
Mido Gakuen’s mathematics teacher. He is in fact, a frequent customer at ‘Club Souther Sea’. He is delighted that the number one hostess he admires has become his colleague, but is at the same time, bewildered.

Tsukaji Muga as Umeda
The chief waiter at ‘Club Southern Sea’. His nickname is Ume-chan. He respects Tennoji Misaki as a hostess, and is in love with her as a woman.

Toda Keiko as Tsuruhashi Shizue
The vice-principal of Mido Gakuen. She is severe with Class 2Z because her teaching philosophy is that “hopeless students have a bad influence on other students”. She is Tennoji Misaki’s natural enemy

Fuse Akira as Tamatsukuri Toshizo
The principal of Mido Gakuen. He is timid and mild-mannered. He wishes to change the school and selects Tennoji Misaki for the job as a teacher.

Zaizen Naomi as Mama
The female proprietress of ‘Club Southern Sea’ where Tennoji Misaki works. Misaki’s benefactor. She is alternately strict and kind with Misaki.

This blog contains information and musings on current and upcoming Japanese dramas but is not intended to be comprehensive.
View all posts by jadefrost →
This entry was posted in NTV, Winter 2011 Dramas and tagged Karina, Misaki Number One!, Tanaka Kei, Toda Keiko, Zaizen Naomi. Bookmark the permalink.