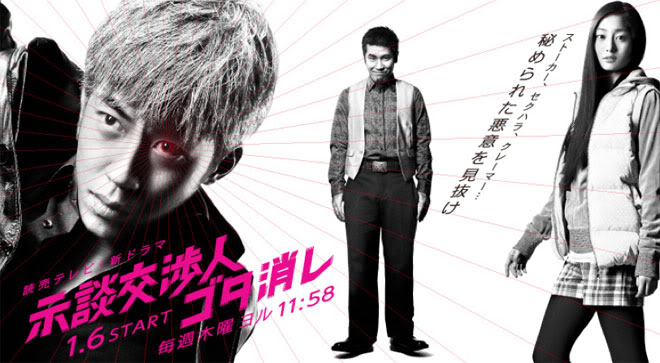 Story
Shirai Torajiro, nicknamed Byakko, is a settlement negotiator. He decides to solve the unexpected trouble that Sakura Ayano’s colleague, Satomi Aiko, is embroiled in. Aiko, who works in the public relations division of a food manufacturer, has been plagued by daily telephone complaints this entire month. Byakko’s analysis from listening to the telephone conversation is that the caller is a cunning claimant whose every word is just barely legal. He concludes from the claimant’s knowledge of Aiko’s full name as well as residential address that the person has a personal vendetta against Aiko. It is later discovered that Aiko had broken up with Wakabayashi Makoto, a university student aiming to be a police official. Everyone suspects Makoto to be the culprit, but Aiko sticks up for him, saying that he is not the sort of person who would think ill of someone. Sensing that Aiko is hiding something, Byakko believes that the trouble cannot be solved unless he finds out what that is … …

Characters
Nishino Akihiro as Shirai Torajiro
Nicknamed Byakko (‘White Tiger’). A loner who dislikes people. He angers clients with his cynical words and also hurts them, but beneath this makes people realise the harshness of life and naivety of their thoughts which reflects his way of love. He is witty and bold, but is physically weak and pull throughs many fighting scenes with bluff. He cannot hold his liquor and his preferred drink is mixed juice. He is also fussy like a child. A former diplomat with the Foreign Ministry, he had undergone a specialised training programme in negotiation techniques and behavioural psychology. His negotiation techniques were the best at the Foreign Ministry and he was the trump card in political diplomacy.

Kutsuna Shiori as Sakura Ayano
A part-timer. She is expressive and has a naive, charming nature. It is because of such a gentle disposition that she has been fooled many times. She cannot stand to see people in trouble, and depends on Shirai Torajiro despite herself. Although often shocked at the ill-natured Shirai, she also yields unexpected information and her presence is hard to deny. As for work, contrary to her motivation, a near-fatal mistake occurred. She was fired and has been changing jobs repeatedly.

Gori as Fujii Shingo
The owner of a bar. He is smart, polished and unscrupulous, but is bound by a strong relationship of trust to the principled Shirai Torajiro. He has extensive contacts from the police to members of the yakuza, and is an expert at intelligence gathering. He is versed in martial arts even though he rarely displays it. He understands Shirai the best and helps Shirai to gather information on the crime groups that he pursues.

This blog contains information and musings on current and upcoming Japanese dramas but is not intended to be comprehensive.
View all posts by jadefrost →
This entry was posted in NTV, Winter 2011 Dramas and tagged Jidankoshonin Gota Keshi. Bookmark the permalink.