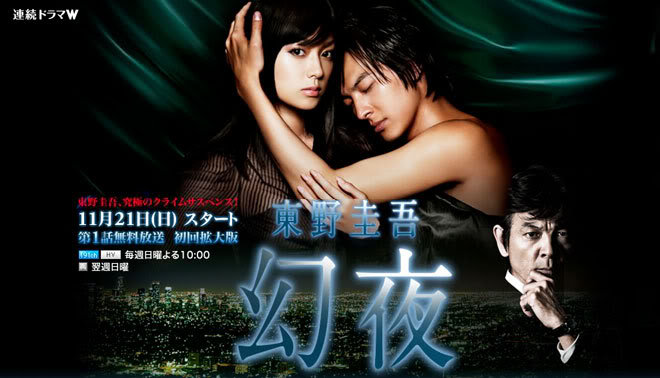 Story
Mizuhara Masaya has inadvertently killed his uncle, who had pressed him to repay debts right after a major earthquake which had taken place the morning after his father’s wake. When he recovers himself, an unfamiliar woman is standing beside him. In the middle of the chaos caused by the earthquake, Mizuhara begins to hang about this woman who calls herself Shinkai Mifuyu. In contrast to the feeble side that Mifuyu displays, she sometimes shows a glimpse of a fiery temper, “You cannot live if you’re not tough!” Before Mizuhara realises it, he has fallen under the spell of her beauty and wit. Then, he learns of the existence of a video tape recording of the death of his uncle and finds himself in dire straits … At that moment, detective Kato Wataru and his partner Nishizaki Takahito arrive from Tokyo at the disaster site in pursuit of the wanted criminal. When Kato happens to catch sight of Mifuyu, he senses something suspicious.

Characters
Fukada Kyoko as Shinkai Mifuyu
An enigmatic beauty. A woman who pursues “beauty” and the “best life” no matter what methods she has to use. Her past before the earthquake is shrouded in mystery.

Tsukamoto Takashi as Mizuhara Masaya
A machine mechanic. He falls under the spell of Shinkai Mifuyu’s beauty and wit, and decides to support her. He is taciturn, but his skills as a mechanic is not in doubt.

Shibata Kyohei as Kato Wataru
A detective who senses that Shinkai Mifuyu and Mizuhara Masaya are behind many of the cases and tenaciously pursues them. On the other hand, he has a painful family matter.

Okunuki Kaoru as Kato
Kato Wataru’s wife. Her mental condition underwent a change as a result of her relationship with her husband, and she killed their own daughter. She is now in hospital.

Suzuki Kazuma as Akimura Ryuji
The owner of a jewellery store. The son of a distinguished family. He takes it upon himself to have a business alliance with Shinkai Mifuyu. After that, he decides to marry.

Fukikoshi Mitsuru as Hamanaka Yoichi
The manager of a jewellery store. A man brimming with ambition and design talent but Shinkai Mifuyu’s charm gets the better of him.

Omi Toshinori as Soga Takamichi
The employee of a trading company. He had an affair with Shinkai Mifuyu in the past and now searches about for Mifuyu who has broken contact with him.

Suzuki Sawa as Soga Kyoko
Soga Takamichi’s wife. She thought that she held built a happy family, but learns the truth through her husband’s disappearance.

This blog contains information and musings on current and upcoming Japanese dramas but is not intended to be comprehensive.
View all posts by jadefrost →
This entry was posted in Fall 2010 Dramas, WOWOW and tagged Fukikoshi Mitsuru, Genya, Okunuki Kaoru, Shibata Kyohei, Suzuki Sawa. Bookmark the permalink.