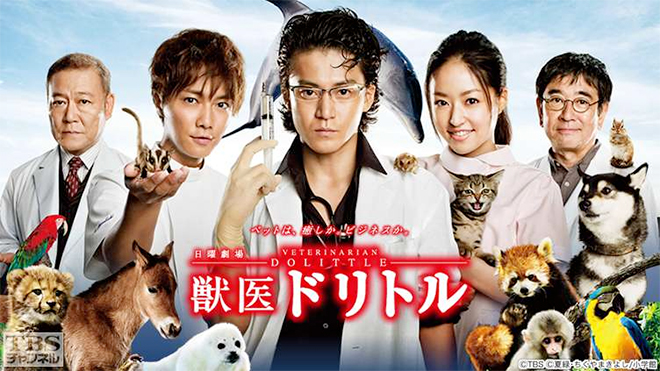 Story
There is a request to treat a cat, which has lost consciousness, at the hospital of the high-profile, charismatic veterinarian, Hanabishi Masaru. However, Hanabishi is very busy and cannot handle all the work. So, he refers Muda Ichiro, the owner of the cat, to Tottori Animal Hospital, mentioning by way of introduction, “He’s excellent but a vet with the worst manners and behaviour.” At that same moment, Tajima Asuka comes to Tottori Animal Hospital with a letter of introduction from Professor Tomizawa to treat ‘Asuka Mirai’, a race horse with a fracture. The vet, Tottori Kenichi, who goes by the name Doolittle, demands that Asuka prepare 30 million yen for the cost of the surgery and post-surgical upkeep. The unemployed Asuka is at a loss when Muda rushes in carrying his half conscious cat. Doolittle asks for 1 million yen in treatment fees. Although Muda complains that it is too expensive, he agrees for the sake of his son. Doolittle skillfully wields his scalpel in a surgery that looks difficult even to the untrained eye. The operation is a success, but the cat remains in a coma after the surgery. Having seen the surgery, Asuka has faith in Doolittle’s skills, and asks him to operate on the horse. ‘Asuka Mirai’, which has not won any race, is a reminder of Asuka’s late father, and at the same time, a precious, comforting friend as well as a projection of Asuka, who has not been able to find employment and fails in whatever she does. Doolittle operates on ‘Asuka Mirai’ after the cat. However, several days later, an unexpected incident occurs. A famous lawyer who has been hired by Muda appears at the hospital to demand repayment for the operation! Doolittle naturally refuses this request …

Characters
Oguri Shun as Tottori Kenichi
The director of Doolittle Animal Hospital. His nickname is Doolittle. His pet phrase is “veterinary care is a business”. He speaks with sarcasm and is strict with both money and pet owners. He has a reputation for being a competent, rogue veterinarian, but he does not only save “silent animals” that cannot tell of the pain of illnesses and injuries, and whose masters lack knowledge and caution, but also heals the hearts of those troubled owners.

Inoue Mao as Tajima Asuka
Recommended to Tottori Animal Hospital by Professor Tomizawa, she asked Doolittle to treat ‘Asuka Mirai’, a race horse with a fracture. After that, she ended up working at Doolittle’s hospital as a veterinary nurse.

Narimiya Hiroki as Hanabishi Masaru
The director of Hanabishi Animal Hospital. A popular, charismatic vet on TV. He and Doolittle were classmates in university.

Ishizaka Koji as Professor Tomisawa
The teacher of Tottori Kenichi and Hanabishi Masaru during their university days.

This blog contains information and musings on current and upcoming Japanese dramas but is not intended to be comprehensive.
View all posts by jadefrost →
This entry was posted in Fall 2010 Dramas, TBS/MBS and tagged Inoue Mao, Juui Doolittle, Kunimura Jun, Narimiya Hiroki, Oguri Shun. Bookmark the permalink.