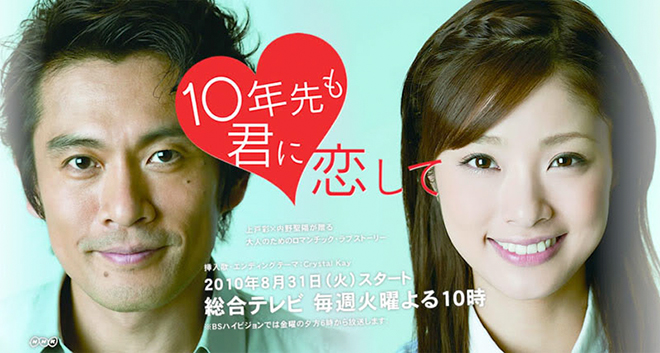 Story
26-year-old Onozawa Rika is an art and literature editor who works for a well-established publishing house. She is devoted to her work because she loves books, but for some reason has had no luck with the men she dates. These past few days, a suspicious-looking man wearing sunglasses and a trench coat has been appearing frequently around Rika, and persistently following her. A suspicious Rika tries to find out his identity. However, the man has an incomprehensible request, “I wish you won’t board the bus that comes after this”. At his insistence, Rika gives up taking the bus, but has a fateful encounter with a young man called Maruyama Hiroshi.

Characters
Uchino Masaaki as Maruyama Hiroshi (at 30)
A researcher who works at an elevator company. At a glance, he seems to be a taciturn young man who majored in science, but inside, he is a romantic and once he starts talking about the space elevator which is his lifework, he will not stop. He is a shy person but falls in love with Onozawa Rika.

Uchino Masaaki as Maruyama Hiroshi (at 40)
Maruyama Hiroshi ten years later in 2020. He has developed a new material for elevators and started up his own company. He has also become a commentator on television, developed a refined taste in hairstyles and clothes, and transformed into a shamelessly talkative man. He appears from the future to stop his marriage with Rika.

Ueto Aya as Onozawa Rika
An editor who works at a well-established publishing house. Her parents divorced when she was a child, and she and her brother were brought up by their grandmother. The times when she read novels were the only moments she had felt happiness in a life of poverty, so she pursued a career as an editor. Her purpose in life is to produce good books that many people can read. She has had no luck with men, and a man she had once dated was arrested for being a molester.

Ueto Aya as Maruyama Rika
Rika ten years later in 2020. She married Maruyama Hiroshi and initially led a happy wedded life. However, a gulf gradually grew between them and they are unable to reconcile now. She is preparing to divorce Hiroshi.

Gekidan Hitori as Hidaka Koji
A young author who is becoming popular as the standard bearer for romance novels. He has complete faith in Onozawa Rika’s capability as an editor and is actually secretly in love with her.

Takashima Reiko as Aoyama Hisako
The deputy manager of the publishing company’s art and literature department, who is usually a capable woman, but adores love stories. She is very much in Onozawa Rika’s confidence. Hisako is a divorcee and has a son who is a high school student. She is interested in Maruyama Hiroshi from the future.

Fuji Tatsuya as Mitamura Kosuke
Maruyama Hiroshi’s teacher in university. Japan’s leading astrophysicist. He has secretly built equipment for a time machine and has been researching round the clock. He sees through Hiroshi who has arrived from the future through the time machine, and becomes his confidant.

Nakamura Yuichiro as Morimatsu Hayato
Maruyama Hiroshi’s good friend since university days, and a postgraduate student at Mitamura Kosuke’s research lab. Because Hayato is a busybody, he ends up giving advice on love to Hiroshi who goes in and out of the lab. However, he frequently gives guidance which misses the mark.

Sometani Shota as Onozawa Yuta
Onozawa Rika’s younger brother. He has his sights on being a musician and lives the life of a part-time worker. He hits it off with Maruyama Hiroshi who has come from the future, and tries to help him in his mission.

This blog contains information and musings on current and upcoming Japanese dramas but is not intended to be comprehensive.
View all posts by jadefrost →
This entry was posted in NHK, Summer 2010 Dramas and tagged Sometani Shota, Takashima Reiko, Uchino Masaaki. Bookmark the permalink.