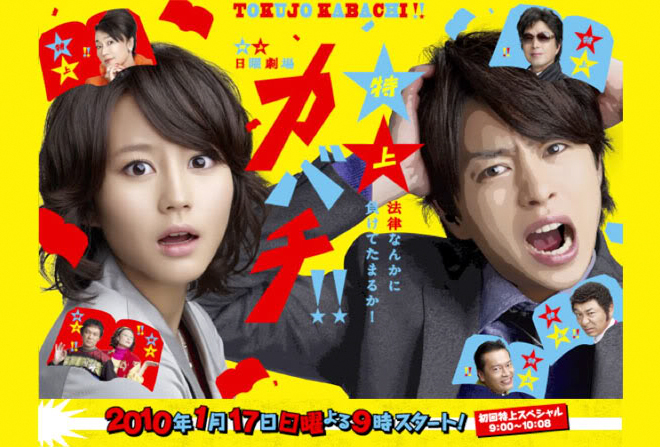 Story
Tamura Katsuhiro, who has his sights on being a notary public, works at Ono Notaries Public Law Firm. He always gets yelled at by the head of the firm, Ono Isamu, and his superiors, Sakaeda Chiharu and Shigemori Kanji, for only taking jobs that are not lucrative. One day, Tamura, who is advising a client about the repayment of money he had borrowed from a good friend, meets Sumiyoshi Misuzu, the notary public representing the other party. Tamura clashes with the neat and demure but strong-minded Misuzu. He runs about and tries to somehow resolve the problem without destroying the friendship between the men. However, he loses ground to Misuzu who uses ruthless and dirty methods. Before long, he loses the confidence of his client …

Characters
Sakurai Sho as Tamura Katsuhiro
A notary public’s assistant. Born in Hiroshima. He works at Ono Notaries Public Law Firm while trying to obtain his license. His nickname is ‘Yutori’ because he grew up in a generation with breathing space. He is a hot-blooded person who is easily moved to tears and when he see people in trouble, he will not leave them alone. His personality is such that he empathises not just with his client but also with the the other side. He is utterly hopeless in love. He hates Sumiyoshi Misuzu, whom he clashed with because of some case. He cannot condone her way of doing things and the two of them fight like cat and dog but …

Horikita Maki as Sumiyoshi Misuzu
A licensed notary public who obtained her license at the same time she graduated from high school and this is her fourth year in her career. She loves her work and hates men (she has actually divorced once). She is unusually strong-willed, hates to lose and frequently uses her cute appearance as a weapon in fights. She has gone from one law firm to another to brush up her skills. She is willing to play dirty for the sake of her clients’ interests. Because of that, she hates Tamura, who is incapable, unreliable but filled with a sense of justice, and treats him like a fool.

Endo Kenichi as Shigemori Kanji
A veteran notary public. He is the number two at Ono Notary Public Law Firm. His nickname is ‘Oni no Shige-san’ because he is an ogre-like superior who puts the firm’s interests ahead of everything else. Because he is the treasurer and particular about money, his principle is not to accept jobs that are not lucrative. He repeatedly tells Ono Isamu, the head of the firm, that he should not keep Tamura, who helps when he sees people in trouble, but he does not loathe the meddlesome Tamura.

Asano Yuko as Kebisawa Kyoko
A beautiful, capable and well-connected lawyer who runs Kebisawa Law Firm. She helps when Ono Notary Public Law Firm needs a lawyer. She has no interest in anything but the best and she only chooses good-looking men as her subordinates. She has an unfortunate but inseparable relationship with Ono Isamu and is a good business partner but was their relationship actually more than that in the past?

Takahashi Katsumi as Sakaeda Chiharu
A notary public’s assistant at Ono Notary Public Law Firm. He is like its drill sergeant. Because he is Tamura’s trainer during his probation period, he always bullies Tamura for getting Shigemori Kanji angry with the excuses and mistakes that he makes. He has the nickname ‘Punch Gorilla’ because of his curly hairstyle, colourful suits and big build.

Nakamura Masatoshi as Ono Isamu
The head of Ono Notary Public Law Firm. His nickname is ‘Dai-sensei’. Although he is a notary public, he reigns as resourceful person of the law because he is more shrewd than lawyers. He uses a variety of tricks such as leverage, bluff, threats, jokes and personal connections to face trouble and is virtually invincible. He is a heartless man who will do whatever dirty work for his clients and reprimands Tamura, who easily gets carried away by his emotions, but he values Tamura’s passion and watches over him.

This blog contains information and musings on current and upcoming Japanese dramas but is not intended to be comprehensive.
View all posts by jadefrost →
This entry was posted in TBS/MBS, Winter 2010 Dramas and tagged Asano Yuko, Endo Kenichi, Nakamura Masatoshi, Sakurai Sho, Takahashi Katsumi, Tokujo Kabachi. Bookmark the permalink.