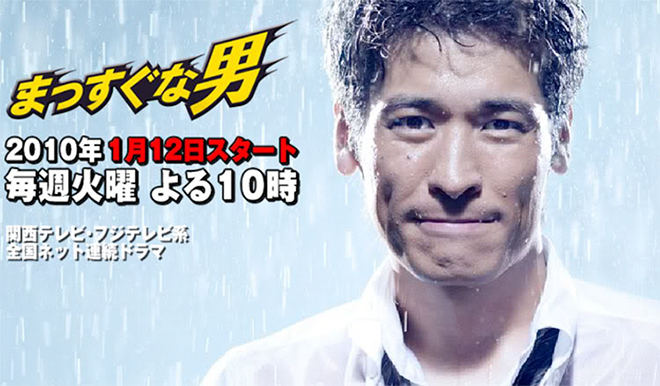 Story
Matsushima Kenichiro, who works at a mid-size construction company, detests dishonest behaviour. He also does his best to reflect the needs of his clients in his job. Matsushima has such an honest personality but is hopeless when it comes to love. He is completely oblivious of the love that his friend, Machida Yoshino, has for him too. One day, Matsushima meets a female called Kurita Narumi at a work-related party. She picks up the invitation card that he had dropped, sneaks into the party by impersonating as Matsushima’s representative, and eats the food. Matsushima’s fate changes with his encounter with this impish female …

Characters
Sato Ryuta as Matsushima Kenichiro
Works at the Business Development Division of Frontier Construction, a mid-size construction company. He loathes illogical things and cannot leave people who are in trouble alone. It has been his dream since childhood to construct big buildings and bridges and he hopes that he can fulfil his dream someday at this present company. During his school days he practised judo, and now teaches children as a volunteer. He has an honest personality but is hopeless in love. Completely oblivious to Machida Yoshino’s love for him, he is asked by his colleague, Kumazawa Shiro, who likes Yoshino, for help to succeed in love.

Fukada Kyoko as Kurita Narumi
An impish character whose charm people find irresistible despite her free-spirited, irresponsible, insolent and self-indulgent behaviour. She also disregards rules with a straight face. Her personality is the complete opposite of Matsushima’s. Naturally, Matsushima tries to correct her and preach many things but it is not that easy and she instead enfolds him in her own pace and makes fun of him. Her life is also haphazard and unplanned. She shows up and asks to stay at Kayashima Yukie’s apartment and they end up living together.

Kanjiya Shihori as Machida Yoshino
A shop assistant at Anya, a general merchandise shop in the city centre which carries Italian accessories. She has a cheerful and level-headed personality. She radiates a healthy charm but is the type who lacks sex appeal. Although she appears strong-minded and assertive, she has weaknesses and does not have confidence in herself. When she encountered trouble on the road, she was saved by Matsushima, who happened to be passing by, and they have been friends since then. She has a secret crush on the honest Matsushima.

Endo Yuya as Kusaka Hideki
Matsushima’s junior at Frontier Construction. Matsushima, Kumazawa and him are buddies who go eating and drinking together. With the addition of Machida Yoshino, they are like a chummy group. He intervenes when Matsushima and Kumazawa have arguments, and plays the part of a loser but is the darling of his seniors. He is quite well-organised and particular about cleanliness.

Sasaki Nozomi as Kayashima Yukie
Kurita Narumi’s housemate. Narumi came to live at Yukie’s apartment without permission and has been freeloading off her for half a year. She aims to be an actress and is taking lessons while working part-time. She feels that Narumi’s audacious behaviour in her apartment is a nuisance and hopes she will leave soon but they become friendly in their own way. Although she is a beauty, she cannot get rid of her Akita accent and when she gets nervous, the accent also emerges in her remarks.

Tanaka Kei as Kumazawa Shiro
He joined Frontier Construction at the same time as Matsushima and is his close friend. After they got into a huge quarrel during their induction at the company, they strangely hit it off well with each other. Because he is somewhat more exceptional than Matsushima, the company has expectations of him. He and Matsushima are good rivals in their work. He likes Machida Yoshino and asks Matsushima to help the two of them get on well. He dislikes Kuritani Narumi and would disparage her.

Watabe Atsuro as Yabe Norio
The owner of a bar. He seems to have an unfortunate but inescapable relationship with Kuritani Narumi and it looks like there was a period when they were lovers. He is skillful with females and is the type of irresponsible man who is popular with women. Narumi snaps that Yabe is “as usual an irresponsible man” but, if anything, Narumi sometimes feels a sudden attraction to Yabe and gets close to him. Matsushima views Yabe’s way of life critically, but at the same time, also has the feeling that he cannot cross swords with Yabe, who inhabits a world that he knows completely nothing about.

This blog contains information and musings on current and upcoming Japanese dramas but is not intended to be comprehensive.
View all posts by jadefrost →
This entry was posted in Fuji TV, Winter 2010 Dramas and tagged Kanjiya Shihori, Massuguna Otoko, Tanaka Kei, Watabe Atsuro. Bookmark the permalink.