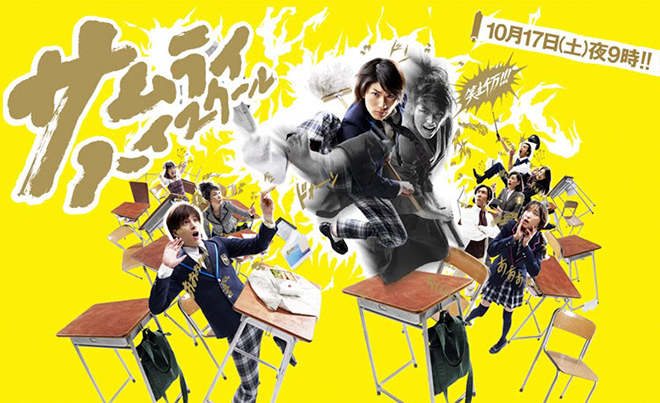 Story
Mochizuki Kotaro, a third-year high school student, is a soft, sensitive guy who is poor in studies as well as sports. Even though Kotaro encounters the bullying of his classmate, Nakamura Takeshi, he pretends that the situation does not exist and his childhood friend, Nagasawa Ai, is disheartened. One day, Kotaro borrows an old book on wars after he dreamt that he had fought in the “Siege of Osaka” (1615). Through the book, he learns that one of the samurai, who had bravely fought and died in the battle at the young age of 17, is his ancestor. That night, Kotaro stumbles upon Takeshi as he is threatened and forced to shoplift by female student(s). The spirit of the “samurai” that Kotaro had seen in his dream suddenly possesses the helpless and flustered Kotaro …

Characters
Miura Haruma as Mochizuki Kotaro
A 17-year-old, third-year student who attends a private high school. He is a so-called soft, sensitive guy who is not good in studies and sports, has no talents worth mentioning and is weak-willed. Then one day, when he gets into a tight spot, he transforms into a samurai who lived through the Sengoku (Warring States) period. And with the help of the mysterious power from an old book, his own abilities soon develop …

Shirota Yu as Nakamura Takeshi
Kotaro’s classmate. He is tall and good looking but is submissive to girls and gets bullied by those around him.

Anne as Nagasawa Ai
Kotaro’s childhood friend. She has a strong sense of justice and is always worrying about the hopeless Kotaro.

Kobayashi Ryoko as Minami Yurika
A classmate. She is Ai’s close friend but she looks down on Kotaro.

Kishitani Goro as Mochizuki Shinji
Kotaro’s father. A kind character. He tells Kotaro that his ancestor may have been a general in the Sengoku period.

Ichikawa Mikako as Miki Sayaka
The teacher-in-charge. She is strict with her students but is indifferent to the school’s policies.

Muroi Shigeru as Kamei Kyoko
The school principal. She proactively commends and is affectionate to the straight-A students but is cold to Kotaro and other student who have no talents.

This blog contains information and musings on current and upcoming Japanese dramas but is not intended to be comprehensive.
View all posts by jadefrost →
This entry was posted in Fall 2009 Dramas, NTV and tagged Anne, Kishitani Goro, Miura Haruma, Samurai High School, Shirota Yu. Bookmark the permalink.