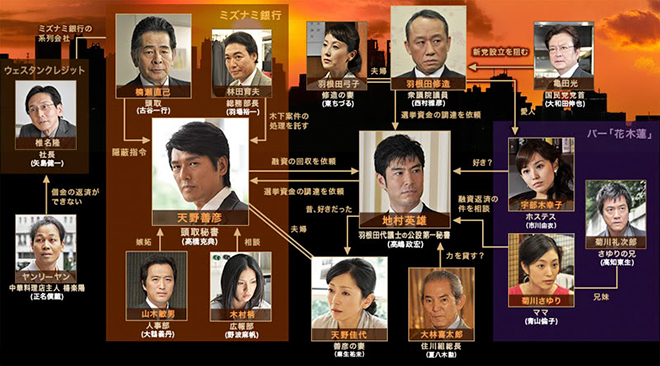 Takahashi Katsunori as Amano Yoshihiko
Secretary to the President of Mizunami Bank. He had charged the upper management of attempting to cover up embezzlement. Under the new leadership of Kusunose Naoki, Amano plans an internal reform but many difficulties lie in his way.

Takashima Masahiro as Chimura Hideo
Chief Secretary of the Diet lawmaker, Haneda Shuzo. Amano and him had been the pitcher and catcher on their university baseball team. He is good at wheeling and dealing.

Aso Yumi as Amano Kayo
Amano’s wife. A piano teacher. Amano and Chimura had liked her during their university days.

Ichikawa Yui as Ubeki Sachiko
A hostess at Bar Kabokuren. She is Chimura’s girlfriend and Haneda’s mistress. She is good at fawning on men.

Aoyama Noriko as Kikukawa Sayuri
The proprietress of Bar Kabokuren which she owns because of the capital she had secretly obtained from an adviser at Mizunami Bank.

Nishimura Masahiko as Haneda Shuzo
A lawmaker of the Lower House of the Diet. An influential person belonging to the ruling party. He aims to establish a new party and take office as the prime minister. He loves women.

Furuya Ikkou as Kusunose Naoki
President of Mizunami Bank. He returns from abroad to overhaul the bank’s management. He trusts Amano and relinquishes power to him.

Natsuki Isao as Obayashi Kitaro
President of Sumikawa-gumi. He has connections with the political circle as well as the underworld. It also seems that Kusunose and him are associates.

This blog contains information and musings on current and upcoming Japanese dramas but is not intended to be comprehensive.
View all posts by jadefrost →
This entry was posted in Fall 2009 Dramas, WOWOW and tagged Aso Yumi, Furuya Ikkou, Inpei Shirei, Takahashi Katsunori. Bookmark the permalink.