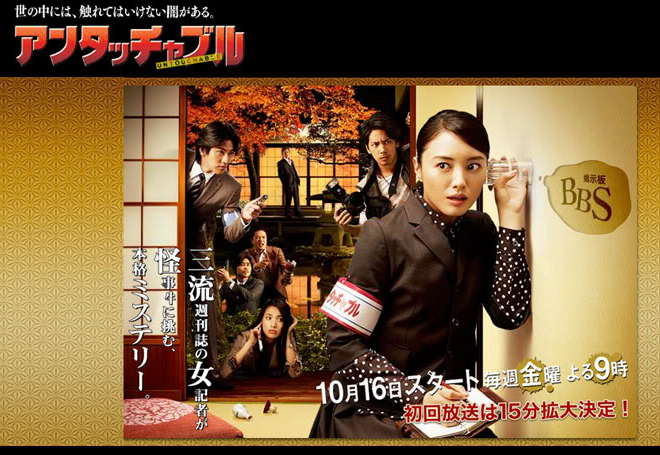 Story
It is the first day of work. Narumi Ryoko is barely in time when she slips into the editorial department of Shukan Untouchable. She turns on the television without saying hello. The person on screen, Arisugawa Sumire, a charismatic journalist whom Ryoko respects, is reporting on the accidents of Futaba Construction, pointing out the company’s shoddy structures. Sumire’s expose hits the mark and she also becomes a sensation in the news. In the midst of this, the editor-in-chief, Kashimura Hideaki, orders Ryoko to interview Sumire for an article. It is not about Sumire’s expose but a search for the truth regarding photographs of Sumire’s secret affair which had been sent to the editorial department anonymously. Ryoko resists but reluctantly goes for the interview. Together with the photographer, Takafuji Shunichi, Ryoko lies in wait for Sumire …

Characters
Nakama Yukie as Narumi Ryoko
She belonged to the first-rate weekly publication, Citizen’s Journal. However, she gets into a huge quarrel with her superior and is fired. A self-styled social journalist, her inflexible personality brings disaster and she cannot find reemployment so she reluctantly joins a third-rate magazine, Shukan Untouchable, in her struggle to survive. Because she is half-baked and spouts lofty ideals, she is in limbo in the company. She also overreacts but delves into cases with her strong sense of justice and duty.

Kaname Jun as Toyama Shiro
A journalist with Citizen’s Journal. An elite and future candidate for an executive position. He has the spirit of a journalist but will not go against company policies. He sometimes abandons opportunities for big scoops if he has to step into dangerous territory. There were rumours that he had been dating Ryoko but the truth is a mystery. They also frequently get into quarrels at the locations where they gather information.

Terashima Susumu as Nagakura Eiichi
The president of Nagakura Holdings which operates diverse businesses. An enterprising businessman who has used his massive assets as capital for philanthropic work such as education and public welfare. He is politically well-connected and has links with various people of authority. He seems to have some sort of connection with Shukan Untouchable but the details are sketchy.

Sato Tomohito as Takafuji Shunichi
A photographer with Shukan Untouchable. He is accommodating and able to handle anything flawlessly but has a rather short attention span. Designated to be the partner of the eccentric Ryoko, Shunichi is at first sour but through the repeated information gathering that he is forced to do, he finds himself taking an interest in the truth on the flip side of things.

This blog contains information and musings on current and upcoming Japanese dramas but is not intended to be comprehensive.
View all posts by jadefrost →
This entry was posted in Fall 2009 Dramas, TV Asahi and tagged Ashina Sei, Kitamura Kazuki, Nakama Yukie, Ozawa Yukiyoshi, Terashima Susumu, Untouchable. Bookmark the permalink.