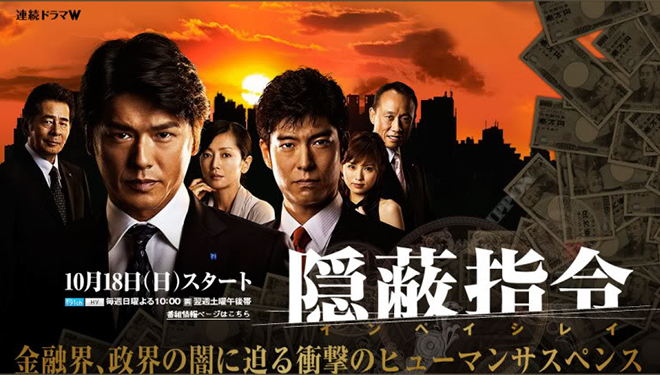 Story
Amano Yoshihiko, a high-calibre employee at Mizunami Bank, a major bank, has been sidelined for once revealing misconduct within the bank to the mass media because of his honest personality and strong sense of justice. However, when Amano’s trusted superior, Kusunose Naoki takes over as the president following the bank’s large-scale merger with Fuso Bank, Amano is selected to be his secretary. Kusunose orders Amano to handle the bad debt of a Ginza club linked to the previous president’s mistress, Kikukawa Sayuri, behind closed doors. On a visit to the club, he is reunited with his close friend from his university days, Chimura Hideo, who is now the secretary of Haneda Shuzo, the popular Diet member. The two of them had actually once fought over Amano’s wife, Kayo. Before long, each person starts to probe the other’s intentions and from that moment on, Amano’s life begins to get off track …

This blog contains information and musings on current and upcoming Japanese dramas but is not intended to be comprehensive.
View all posts by jadefrost →
This entry was posted in Fall 2009 Dramas, WOWOW and tagged Aso Yumi, Furuya Ikkou, Inpei Shirei, Takahashi Katsunori. Bookmark the permalink.