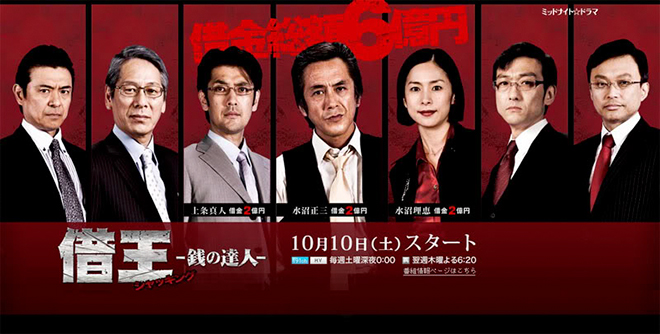 Story
Detective Mizunuma Shouzo, his younger sister Rie, who works at a firm of judicial clerks, and Kamijo Masato, a psychiatrist who runs a mental clinic, are each saddled with enormous debts of 200 million yen for a variety of reasons. These three people join hands and commit fraud to strip money from rich people and pay off their debts. The first target that they have set their eyes on is Inokuma Realty which has a cosy relationship with the Social Insurance Agency. Inokuma had bought up land in Atami with the aim of selling it to the Social Insurance Agency but has lost a buyer as a result of the economic downturn. The targets are people that the common folk cannot forgive such as the real estate company which profits from its collusion with the Social Insurance Agency and the government officials who disregard the pension issue and continue to get cushy jobs after retirement.

Characters
Terajima Susumu as Mizunuma Shouzo
A detective of Jonan Police Precinct. He takes a loan for the costs of his daughter’s heart surgery and when combined with interest, the total amount adds up to 200 million yen. He uses investigation information and has links with the underworld.

Nishida Naomi as Mizunuma Rie
A judicial clerk and Mizunuma Shouzo’s younger sister. She was a guarantor for her one-time boyfriend and becomes saddled with a debt of 200 million yen

Horibe Keisuke as Kamijo Masato
A psychiatrist. He takes a loan of 200 million yen as settlement money for a traffic accident. He uses psychological analysis as a weapon.

Fukikoshi Mitsuru as Koshikawa Motohiro
Inspector, Tokyo Metropolitan Police. He monitors the movements of Mizunuma Shouzo and the rest. He has connections with Inokuma Zenzo and is highly ambitious.

Masu Takeshi as Tokui Yutaro
Chairman of Kyuyukai. The yakuza boss who makes money with Inokuma Kunio through land speculation. He has a cruel character.

Aijima Kazuyuki as Inokuma Kunio
President of Inokuma Realty. The son-in-law of Inokuma Zenzo who helps to find land at the Social Insurance Agency. He has a sly character.

Tamaru Maki as Minamida Keiko
A secretary at Inokuma Realty. Inokuma Kunio’s right-hand man. She takes part in the business dealings despite knowing its dirty nature.

Osugi Ren as Isomura Kenichi
A former Social Insurance Agency government official. He made a lot of money illegally and obtained a cushy job in a private firm after his retirement. He has an interest in gem appreciation.

Taguchi Kei as Inokuma Zenzo
A member of the lower house and big gun in the political world. He calls Koshikawa Motohiro to investigate, tempting him with the post of Superintendent General of the Tokyo Metropolitan Police.

Watanabe Noriko as Mukai Sachiko
Lawmaker Inokuma Zenzo’s secretary. A capable secretary who also knows about his corrupt side. She responds to talk about donations from Mizunuma Shouzo and the rest.

This blog contains information and musings on current and upcoming Japanese dramas but is not intended to be comprehensive.
View all posts by jadefrost →
This entry was posted in Fall 2009 Dramas, WOWOW and tagged Horibe Keisuke, Osugi Ren, Shakking Series, Terajima Susumu. Bookmark the permalink.