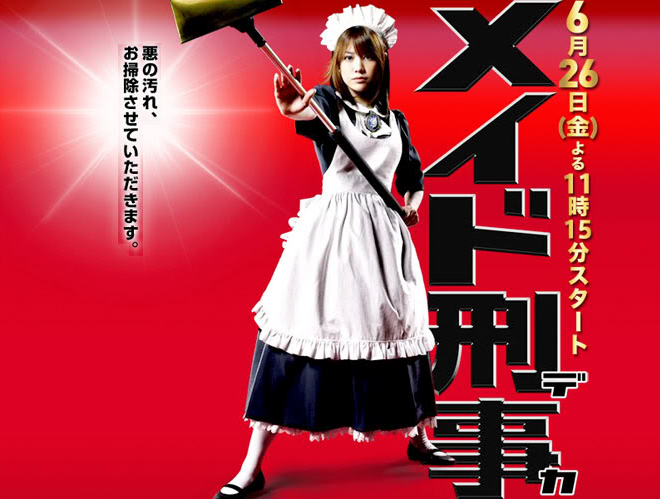 Story
The dead body of Yuki, a maid working at the residence of the Kyoto prefectural lawmaker, Sengoku, is found at the Kamogawa. It seems to be a suicide but there is a high possibility of murder because no fingerprints were detected from the suicide note. However, Asakura, the butler, says Sengoku will use his position as prefectural lawmaker to refuse police intervention. Kaido Toshiaki, chief of the Kyoto Prefectural Police, asks his trusted man, Assistant Inspector Kaji Masaharu, to investigate and orders his maid, Wakatsuki Aoi, to infiltrate the Sengoku residence …

Characters
Fukuda Saki as Wakatsuki Aoi
An excellent maid who usually works at the Kaido residence. However, when she takes instructions from her master, Kaido Toshiaki, she infiltrates stately mansions that the police cannot step into for investigations, as a maid and uses the cutie cleaner as a weapon to bring crimes to light. She used to head a ladies gang.

Harada Ryuji as Kaido Toshiaki
Chief of the Kyoto Prefectural Police. His father had also been the police chief but his parents have already passed away and he lives in the big residence by himself. He strikes a cool, calm and collected figure in his suit but is a passionate person. He values his staff and is respected by everyone. Acquainted with Aoi during “some case” in the past, he helped her to turn over a new leaf and put her up in his residence as a maid.

Matoba Koji as Kaji Masaharu
Detective from the First Investigative Division of the Kyoto Prefectural Police. Cheerful, good-natured but slightly scatterbrained. He moved in the same circles as Chief Kaido during their university days and although Kaji is the senior and Kaido is his junior, they share a good relationship that transcends their positions as boss and subordinate. Aoi regards him as a formidable ally who tells her investigative information.

Shinagawa Toru as Butler Asakura
The butler at the Kaido residence. His age is uncertain. He is terribly experienced and has extensive knowledge … He brings up his past experience and gives advice to Aoi on the cases that she has been assigned. That existence is a mystery but he is a trustworthy person who isn’t fazed by anything.

This blog contains information and musings on current and upcoming Japanese dramas but is not intended to be comprehensive.
View all posts by jadefrost →
This entry was posted in Summer 2009 Dramas, TV Asahi and tagged Fukuda Saki, Maid Deka. Bookmark the permalink.