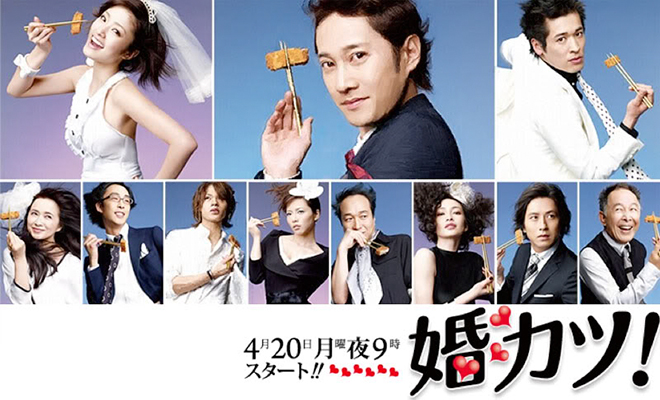 Story
In the middle of the “ice age” of employment, Amemiya Kuniyuki, who graduated from a third-rate university and worked in a certain corporation, lost his job through corporate restructuring. Then he hears talk of the local recruitment of temporary workers, he immediately applies. He attends the test with enthusiasm but when it is time for the interview, he learns that he has to be a married man to qualify for employment. This is part of a countermeasure to the falling birthrate. Because Kuniyuki is single-minded in wanting the job, he lies that he “has plans for marriage”. He thinks that he will work on it if he is recruited, but is forced to embark on a marriage hunt. His workplace is an aid project for marriage hunting …

Characters
Nakai Masahiro as Amemiya Kuniyuki
A graduate from a third-rate university. He was working in a corporation but is currently unemployed and applies for a position as a temporary worker in the district that he lives in. Learning that he has to be a married man to qualify for recruitment, he lies that he “has plans for marriage” and ends up in a marriage hunt. He is the sort who does things at his own pace and values his buddies more than romance. He is the son of a tonkatsu shop owner but he dislikes the smell of the mix of meat and oil, and doesn’t want to take over the business.

Ueto Aya as Tobita Haruno
A part-time worker at Kuniyuki’s tonkatsu shop. Her place of employment had been determined but it was unofficially decided that she would be dropped and so she goes about job hunting while working part-time. She is not very good at doing her job but she is a cheerful and lively girl and has known Kuniyuki for a long time because they are neighbours. She comes to know that Kuniyuki has begun a marriage hunt. Taking a keen interest in it, she also gets into the marriage hunt but … ?

Sato Ryuta as Fukasawa Shigeru
Kuniyuki’s childhood friend and buddy. He is the oldest son of the owner of a liquor shop and has taken over the business. He wants to have an heir and has a strong desire to get married. Despite his timidity, he brags about “persistence with women”, and is over with being a “good person”. He speaks his mind to Kuniyuki but through the marriage hunt, he gradually comes to discover his true self.

This blog contains information and musings on current and upcoming Japanese dramas but is not intended to be comprehensive.
View all posts by jadefrost →
This entry was posted in Fuji TV, Spring 2009 Dramas and tagged Fubuki Jun, Hashizume Isao, Kohinata Fumiyo, Konkatsu, Nakai Masahiro, Ryo, Tanihara Shosuke, Ueto Aya. Bookmark the permalink.