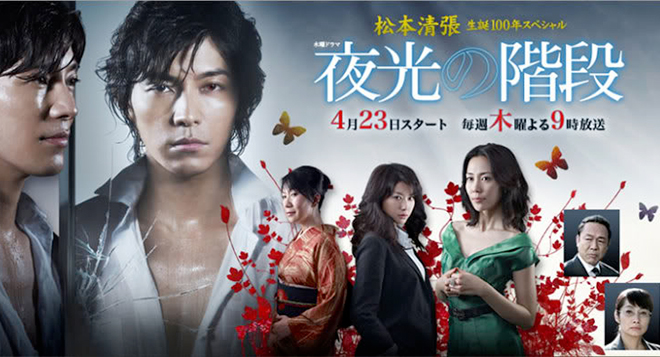 Story
A man and woman who have fled into a grove, hug each other hard … A young man stares at them in the darkness. The next morning, the woman’s dead body is found. Five years later, Sayama Michio, an assistant hairstylist at the hairdressing salon Murase, is scolded by the owner because he has received a luxury watch from a customer, “You’re like a host!” Edamura Sachiko, who has just broken up with a man in front of the salon, is charmed by Sayama. At that moment in the Tokyo Public Prosecutors’ Office, public prosecutor Kuwayama Shinji has received a notice that the criminal in a murder five years ago has died of illness. Several days later, Sayama, who had visited Fukuoka, returns to Tokyo to complete a new hairstyle.

This blog contains information and musings on current and upcoming Japanese dramas but is not intended to be comprehensive.
View all posts by jadefrost →
This entry was posted in Spring 2009 Dramas, TV Asahi, Yako no Kaidan and tagged Fujiki Naohito, Matsumoto Seichou, Natsukawa Yui, Yako no Kaidan, Yo Kimiko, Yoshino Kimura. Bookmark the permalink.