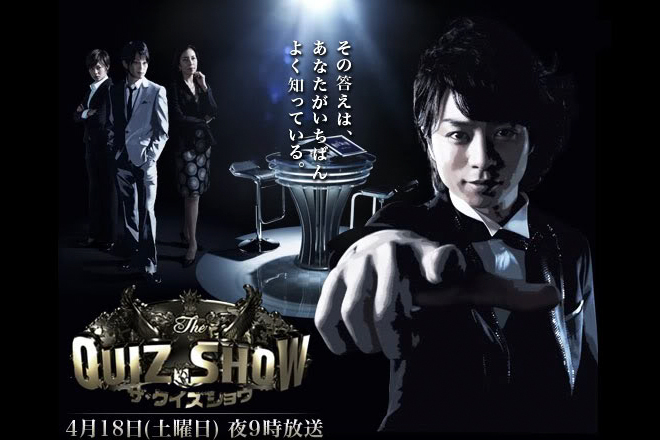 Story
Kamiyama Satoru, the emcee of the quiz programme “The Quiz Show”, welcomes high profile musicians as contestants and the live transmission today is about to begin. Kamiyama has a past in which he had lost his memory but he is found by the programme’s producer, Honma Toshio, and suddenly chosen to be the emcee. Still, his technique at driving the contestants into a corner with his incisiveness is without parallel. Saejima Ryoko, the programme’s producer, and the rookie assistant director, Takasugi Reina, are also completely unaware of Kamiyama’s background. Despite the sense of discomfort that they feel, the programme proceeds. The secrets of those musicians are exposed and they self-destruct…

Characters
Sakurai Sho as Kamiyama Satoru
The emcee of the popular quiz programme “The Quiz Show”. He lost his memory because of some incident. Then he is suddenly put in charge as the emcee at the instructions of the director, Honma Toshio. He has no recollection but he speaks fluently. His past is a mystery.

Yokoyama Yu as Honma Toshio
The programme director. He always has a poker face and is calm and collection. He actually controls the programme and seems to have some hidden agenda. He seems to have had something to do with Kamiyama in the past but …

Matsuura Aya as Takasugi Reina
The programme’s rookie assistant director. She has a strong sense of responsibility and has a keen mind. She is gradually attracted to Honma’s human nature.

Maya Miki as Saejima Ryoko
The programme’s director but because she isn’t under regular employment, her position within the station is weak and she frequently clashes with Honma. Because she is a single mother, she wavers between pride and her livelihood.

This blog contains information and musings on current and upcoming Japanese dramas but is not intended to be comprehensive.
View all posts by jadefrost →
This entry was posted in NTV, Spring 2009 Dramas and tagged Maya Miki, Sakurai Sho, The Quiz Show. Bookmark the permalink.