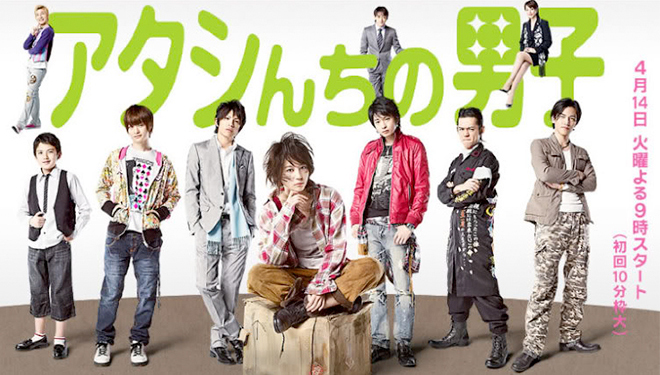 Story
Mother has died of illness and father has left behind a 100 million yen debt and disappeared. Mineta Chisato is forced to lead the life of a homeless person, moving from one internet cafe to another to flee debt collectors. One day, while she is being pursued by debt collectors, a man called Okura Shinzo appears and says that he will pay the debt on her behalf, “I just want you to be by my side.” His condition is that she be his wife for a month and Chisato makes the promise. However, Shinzo passes away after one month. Then six adopted sons who think that they are Shinzo’s heir are assembled, and Chisato ends up living with them under the same roof as their mother.

Characters
Horikita Maki as Mineta Chisato
Her mother died of illness and her father has disappeared, leaving behind a debt of 100 million yen. She marries Okura Shinzo, who offers to pay off the debt for her, on condition that she be his wife. However, Shinzo passes away after one month. She becomes the mother of six sons who are not her blood relations. She is the type who immediately carries out her thoughts when ideas comes to her, and because she has been through hardship since her childhood, she appreciates having food and a place to sleep more than anyone else. She is strong-willed and a little unrefined.

Yamamoto Koji as Tokita Shuji
He is Shinzo’s right-hand man and a top executive at Shinzo’s company, Miracle. He volunteers to assist Chisato, who is suddenly made the president of Miracle and feels awkward with her heavy responsibilities. He has a warm personality, a kindly smile and comfortable presence but he actually isn’t a simple man. He has a sense of humour and is good at talking. His past is shrouded in mystery.

Kaname Jun as Okura Fu
The Okura family’s eldest son. He is unemployed and at a glance seems to be irresponsible but is actually a level-headed person. However, he leads a loose life when it comes to relationships with women. Life is good for him because he has a lot of women but he has a wanderlust and appears in unexpected places at unexpected moments. He was always at the top of his class during his childhood and entered the Okura family when he was 15. He received hothousing as the heir but because of his carefree personality, he hasn’t the slightest intent of taking over the business.

Okada Yoshinori as Okura Takeru
The Okura family’s second son. He is currently a member of a motorcycle gang and in the day, he rides his prized motorcycle as a motorbike messenger. Gambling is his hobby. He is an outdated delinquent and bascially clueless. He is always ready for fights but is weak and a show-off. He gets carried away easily and tells exaggerated lies about himself. When he drinks alcohol, his personality undergoes a complete change and he becomes a humble and good-natured. His biological father caused serious trauma to him as a result of some incident.

Mukai Osamu as Okura Sho
The Okura family’s third son. He is a host, has been divorced once and has a child. He currently lives with his son in an apartment. He lived in an orphanage but was adopted by Shinzo when he was 10. In order to pay for maintenance and child support, he works hard as the number one host but his son finds it objectionable and he is annoyed at himself. He has the vigor to rise to the occasion when it is necessary.

Yamamoto Yusuke as Okura Masaru
The Okura family’s fourth son and the charismatic model of fashion magazines. He is popular but is chaste. He has a trauma from his first love who treated him badly in the past. He is uncomfortable around strangers because he is shy. When he was 8, his grandmother died and he was adopted by one of his distant relatives, the Okura family. Now he lives in Shinzo’s house. He looks genial but he is self-centred and has no friends because he is socially inept.

Seto Koji as Okura Satoru
The Okura family’s fifth son. A high school student, he boycotts school and shuts himself in. When he was young, he was in the limelight as a gifted magician. However, when he was 12, the production that his parents ran was suspected of tax evasion and went under. His parents gave him up as an adopted son to Shinzo in exchange for money. Because his parents disappeared, he is open to criticism about the alleged tax evasion. He hasn’t been able to trust people and has become somewhat pessimistic after that …

Tsuruno Takeshi as Kokudo Yutaka
An employee who works at the internet cafe that Chisato frequents. He is an otaku (geek). He sees through Chisato’s cuteness and also knows her tragic situation. His idolises her in two dimension and falls in love with her. It seems disgusting but he is handsome and charismatic as Kokudo-kun in the world of otakus. He doesn’t mention it much but he is actually the son of a millionaire.

Takashima Reiko as Koganei Kyoko
Shinzo’s legal adviser. She is a capable woman, calm and collected and impassive but is sensual and oozes pheromones. She is also an unexpectedly lousy liar, and because of this, she is twisted around by the Okura brokers. She has never been in love.

This blog contains information and musings on current and upcoming Japanese dramas but is not intended to be comprehensive.
View all posts by jadefrost →
This entry was posted in Fuji TV, Spring 2009 Dramas and tagged Atashinchi no Danshi, Mukai Osamu, Seto Koji, Takashima Reiko, Yamamoto Koji. Bookmark the permalink.