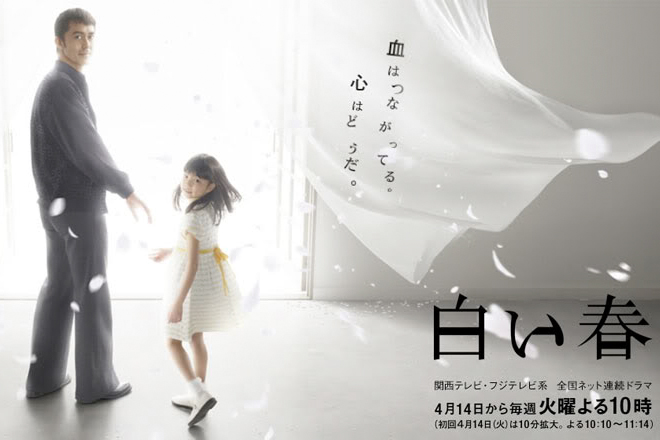 Story
Sakura Haruo is released from prison after serving out his sentence. Haruo, who was charged for murder and had taken leave of his girlfriend Mariko with insensitive words, has abandoned himself to despair. He loiters in the streets like a hooligan just as he had always done in the past and is harassed by a young freeter (part-time workers) couple, Nishida Shiori and Kojima Yuki, who are in an internet cafe. However, Shiori takes an interest in Haruo. Then one day, Haruo meets Sachi, an innocent young girl with the heart of an angel. He initially thinks that she is an “annoying kid” but when he is exposed to her pure smile, his mind changes …

Characters
Abe Hiroshi as Sakura Haruo
A man who was charged for murder and has just been released from prison after serving out his sentence. He used to be a yakuza although one might say that he is a hooligan of the lowest level and only a chess piece to the organisation. With the support of the frail Takamura Mariko, whom he was cohabiting with, Haruo thought he could try to live a normal life. However, when he asked his organisation about it, he was punished, made to leave and committed murder. Thinking that there was no way that a murderer like himself could give Mariko happiness, he deliberately said things that he didn’t mean to hurt her and initiates a one-sided breakup. He abandoned himself to despair for losing his beloved Mariko. Things remain unchanged after prison. Then he meets a young girl called Takamura Sachi. Haruo says she is an “annoying kid” but that is a feeling of embarrassment.

Ohashi Nozomi as Murakami Sachi
A girl who is pure-hearted like an angel. On the other hand, she has, in her own way, the disposition of present-day children, and is not afraid of adults. With that pure heart, she is also spot on about the hidden things in the hearts of adults. Haruo appears to be rather daunting to adults but she is completely oblivious to it in her interactions with him and gradually grows to display affection for him.

Yoshitaka Yuriko as Nishida Shiori
A person who grows to understand Haruo well. She is part-time worker living life aimlessly. She gets to know Haruo, who has just been released from prison, when living at an internet cafe and takes an interest in him because she feels that he has things in common. Haruo treats her unkindly but doesn’t reject her and that is comforting to her. She has reservations about a way of life that hides real intentions, is bound by stated principles and clings at small happiness. She seems to be aiming for some big business opportunity in the sense of triumphing over these adults.

Endo Yuya as Kojima Yuki
A part-time worker who is always out of money. He is willing to do some bad things because he wants to be rich. He likes Shiori and behaves like he is her boyfriend but Shiori only finds him convenient to have around.

Konno Mahiru as Takamura Mariko
The former lover that Haruo had parted with. She has a weak constitution and is already dead from illness when Haruo is released from prison.

Shiraishi Miho as Takamura Kanako
Mariko’s younger sister. She gets to know Murakami Yasushi through her sister. She cannot bear to see Yasushi struggle with the child upon Mariko death and ends up helping him. She now takes care of Sachi while helping out in his shop. However, she doesn’t think well of her sister.

Endo Kenichi as Murakami Yasushi
An average man who is honest and good-natured. He has the personality of the lower middle class who won’t do drastic things because because of his cowardice and cautiousness. He runs a bread shop with Kanako. He got to know Mariko after Haruo was imprisoned and took a fancy to her. However, he knew that she was pregnant with the child of another man but she didn’t talk about the identity of the father of her child. Yasushi accepted her and the child that was on the way, and hoped to live together with them. Mariko hesitated to do so and their relationship remained platonic. She eventually gave birth to her child and died of illness. Yasushi took in the child named Sachi, and raised her as as his own daughter. Because he possesses common sense and decency, he is bewildered when faced with Haruo who doesn’t conform to that standard. Similarly, Haruo is put off kilter by Yasushi’s common sense and logic in seeing things.

This blog contains information and musings on current and upcoming Japanese dramas but is not intended to be comprehensive.
View all posts by jadefrost →
This entry was posted in Fuji TV, Spring 2009 Dramas and tagged Abe Hiroshi, Endo Kenichi, Shiraishi Miho, Shiroi Haru, Yoshitaka Yuriko. Bookmark the permalink.