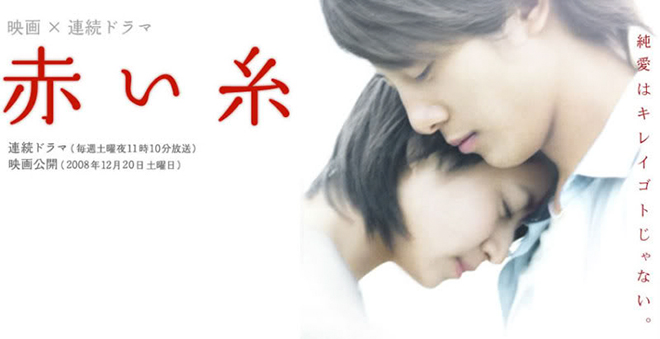 Story
Mei and her older sister, Haruna, and their childhood friend, Yuya, grew up together like siblings. When Haruna went on to high school, her route to and from school was different, so Mei was alone with Yuya every morning. At that time, Mei’s love grew … One day, Mei finds her heart pounding when she is called out by Yuya but what is confessed at the shrine is that he likes Haruna … Mei promises to help Yuya but she is greatly shaken. There’s a youth watching a stunned Mei intently …

Characters
Minamisawa Nao as Takemiya Mei
A second-year junior high school student, living happily with her parents and older sister, Haruna. Bright and cheerful, she has lots of friends. She has fallen in love with her childhood friend, Yuya, but after her love goes unrequited, she begins a love with Atsushi, the person of her destiny.

Mizobata Junpei as Nishino Atsushi
A junior high school classmate of Mei’s for two to three years. Although cool and a person of few words, he is unobtrusively gentle. He was raised single handedly by his mother and his mother, who is a club hostess, has a drug addiction.

Kimura Ryo as Takahashi Riku
Mei’s third-year junior high school classmate. He was brought up by the owner of a set meal shop and a career woman but when he was in his third year of elementary school, his parents divorced because his mother had an affair. He confesses his love to Mei during their third-year school excursion.

Okamoto Rei as Yamazaki Mia
A junior high school classmate of Mei’s from her first to third year, and her best friend. She’s always bright and spirited, and because, she’s always looking to meet guys, she dresses in miniskirts and thin clothes even in the middle of winter. In her third-year, she seriously falls for Kamiya Mitsuru.

This blog contains information and musings on current and upcoming Japanese dramas but is not intended to be comprehensive.
View all posts by jadefrost →
This entry was posted in Fall 2008 Dramas, Fuji TV and tagged Akai Ito, Minamisawa Nao, Mizobata Junpei. Bookmark the permalink.