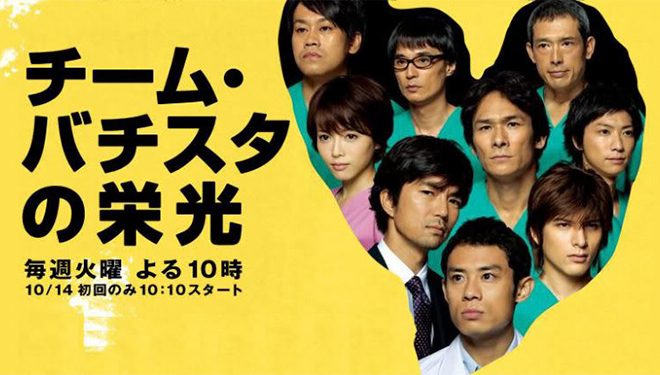 Story
There is a specialist team for Batista surgery called Team Bastista which boasts a 100% success rate for a difficult surgery for heart disorders at the hospital affiliated to Tojo University’s medical school. However, three successive patients have died on the operating table midway through surgery. Could this be medical malpractice or murder? To probe the cause of the deaths, Taguchi Kohei, a doctor practising psychosomatic medicine at the hospital, and an eccentric Health Ministry official, Shiratori Keisuke, put together the strange turn of events and pursue the mystery of the successive suspicious deaths.

Characters
Ito Atsushi as Taguchi Kohei
A consultant at the hospital affiliated to Tojo University’s medical school who listens to complaints of general malaise. Taguchi has no desire to rise in the world and takes things at his own pace. Because he has absolute trust in people and doesn’t tell lies, his honesty gradually relieves the Team Batista members of various troubles and traumas.

Nakamura Toru as Shiratori Keisuke
A technical official attached to the secretarial division of the Ministry of Health, Labour and Welfare’s Secretariat. His duty is to help the police who have limited medical knowledge, and to ease the investigation from the forensic medicine and legal aspects in cases where there is medical malpractice. Insensitive and argumentative, Shiratori is qualified to practice medicine, dissection, postmortems, pathology, forensic physics. His nickname is “logical monster” because of his sharp powers of reasoning.

Shirota Yu as Himuroko Ichiro
A classroom lecturer in anesthesiology. In an operations, he has to have unparalleled accuracy in his assessment as the anesthetist responsible for the patient’s lifeline. Due to a staff shortage, he has had to fill in at several surgeries and he is the only person in the proud and guarded Team Batista who interacts normally with Taguchi.

Shaku Yumiko as Otomo Naomi
Operating room head nurse. She joined Team Batista after the former nurse, Hoshino Kyoko, married and resigned. Naomi is also a lecturer at the nursing school and was told that her skills at handling surgical apparatus was the best until Hoshino entered. Hoshino is the gifted sort while Naomi is the hardworking sort.

Ihara Tsuyoshi as Kiryu Kyoichi
An internationally respected authority on Batista surgery. Kiryu returned to Japan after working at Southern Cross specialist hospital for heart disease in Florida for 10 years. He has had 26 successful surgeries and a success rate of 100% for a surgery that is said to have an average success rate of 60%. He is confident and talented but in an unoffensive way, and has both strength and sensitivity. Always a calm and natural leader.

This blog contains information and musings on current and upcoming Japanese dramas but is not intended to be comprehensive.
View all posts by jadefrost →
This entry was posted in Fall 2008 Dramas, Fuji TV, Team Batista Series and tagged Nakamura Toru, Shirota Yu, Team Batista Series. Bookmark the permalink.