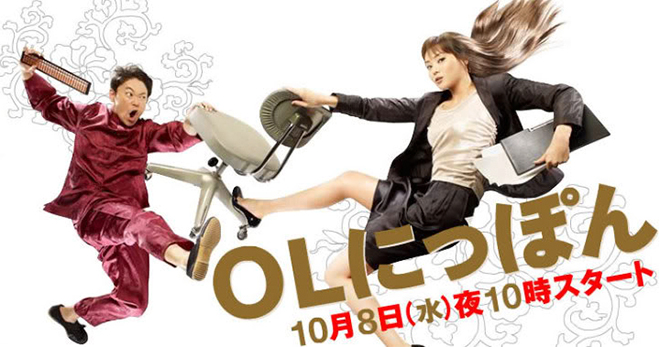 Story
Kanzaki Shimako, who works as a regular employee at the General Affairs Department of an established firm, visits Hangzhou, their Chinese outsourcing location for documentation. Shimako gets into all sorts of trouble but is rescued by two men and returns to Japan after a harrowing ordeal. Awaiting Shimako on her return are the General Affairs Manager’s words, “Trainees have arrived from China.” The General Affairs Department’s regular employees are anxious and fearful that their jobs will be gone. A shady outsourcing coordinator, Shoki Kenta, has brought over two Chinese people, Zhang Lin and Yang Yang. As the flustered regular employees ignore them, Shimako is ordered to train them and finds it exhausting work every day. An uneasy atmosphere shrouds the company …

Characters
Mizuki Arisa as Kanzaki Shimako
A very skillful office lady called “Miss General Affairs”. However, she is still on a journey of self-discovery. Shimako wishes, in due time, to marry and have children, juggling work and family life, but love has not worked out for her and she is past 30. Because she is dedicated to the General Affairs Department, she’s also called the “woman married to General Affairs”.

Abe Sadao as Shoki Kenta
A shady China outsourcing coordinator who used to be a salaryman at a Japanese corporation. He learns kungfu in China, and the Japanese people who compete with him for staff there, taunt him, “Are you still a Japanese?” He was bullied when he was a child.

Minami as Yabe Sakura
A clumsy new employee. Born and raised in Japan, she has a French grandmother and occasionally uses weird Japanese language. Sakura has no special skills and also doesn’t do work at her own initiative. She tags along behind the reliable Shimako, following her around like a shadow. It was love at first sight for Sakura when she saw Li Da Long, a Chinese being trained to be a manager by Kenta.

Azuma Mikihisa as Asahina Kunihiko
The General Affairs Section Head who is committed to his subordinates. Unable to go against the company policy of promoting outsourcing, he is a middle management executive who is caught in a dilemma, not knowing what to do. Because of his indecisive personality, he fears and admires the Chinese staff who plainly make their wishes known. He has fallen in love with Shimako and considers making a proposal.

Asano Yuko as Fujita Yayoi
The General Affairs Manager. She speaks with a heavy Kansai accent and ruthlessly dismisses useless subordinates. Dressed from head to toe in brand names, she has everything she wants whether it may be career or family. She has produced good results with the outsourcing to China, and with her boundless ambition, sets her sights on the company president’s position.

This blog contains information and musings on current and upcoming Japanese dramas but is not intended to be comprehensive.
View all posts by jadefrost →
This entry was posted in Fall 2008 Dramas, NTV and tagged Abe Sadao, Mizuki Arisa. Bookmark the permalink.